Over 55% Polling In Jammu And Kashmir Amid EVM Malfunction Allegations

Lok Sabha Elections 2019: The overall turnout was 55-56 per cent, with the Jammu Lok Sabha constituency recording 72.19 per cent polling and Baramulla registering 35.01 per cent 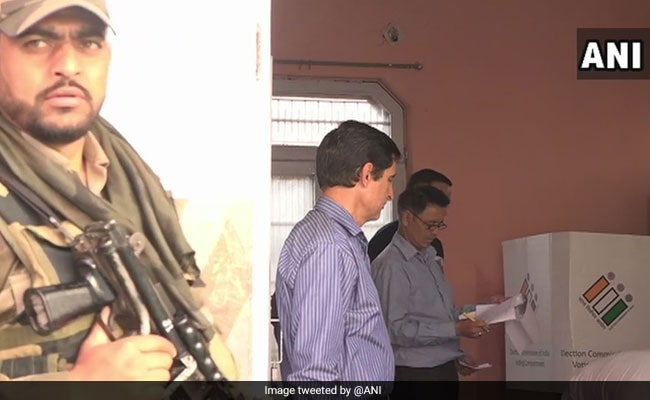 The Jammu parliamentary seat has the highest number of 24 candidates in the state.

Jammu and Kashmir Thursday recorded an overall turnout of over 55 per cent in the Jammu and Baramulla constituencies in the first phase of the Lok Sabha elections, even as there were protests over defective EVMs in some areas.

The overall turnout was 55-56 per cent, with the Jammu Lok Sabha constituency recording 72.19 per cent polling and Baramulla registering 35.01 per cent, Jammu and Kashmir Chief Electoral Officer Shaliendra Kumar told reporters in Jammu.

Polling was largely peaceful, Mr Kumar said, adding that there was, however, one incident of firing in Palhalan of Baramulla and it was being looked into.

To a question on the complaints of EVM malfunctions, the official said, "We have rectified all of them."

Congress candidate from Jammu, Raman Bhalla, who cast his vote in Jammu, had alleged large scale EVM malfunction in Poonch and Mendhar belt of the constituency. He said people protested over the issue. Another Congress spokesman had claimed that in the EVMs, button number four of the Congress was not functioning and complaints were lodged with poll officials.

Former minister and senior Congress leader Shabir Khan had told reporters in Rajouri during the day that defective EVMs had been sent to remote and rural areas of Rajouri and Poonch. But nothing has been done to repair the machines, he had alleged.

While polling was underway, the National Conference and the PDP had alleged that uniformed personnel "coerced" had people to vote for the BJP.

PDP president Mehbooba Mufti tweeted a video showing voters raising anti-BJP slogans after they were allegedly "roughed up" by BSF jawans for not voting for the BJP.

"A voter at polling booth in Jammu was manhandled by the BSF because he refused to cast his vote for BJP. Using armed forces at polling stations to coerce people to vote for the BJP shows their desperation & hunger to usurp power by hook or crook," she said in her tweet.

To this, the chief electoral officer said a BSF assistant commandant and a few other personnel were replaced following the incident over dereliction of duty as they were unable to handle the situation.

He, however, counselled politicians to verify facts before putting them in the public domain as he said BSF personnel were not involved in beating the people.

Polling began amid tight security at 7 am in the Jammu constituency, with voters in Samba, Jammu, Rajouri and Poonch turning out early morning to exercise their franchise, officials said.

While Jammu district recorded 72.19 per cent polling, Samba registered the highest turnout of 73.8 per cent, followed by Rajouri district with 65.7 per cent and Poonch with 68 percent, they said.

In Rajouri and Poonch border districts, people along the Line of Control came out in large numbers to exercise their franchise, the officials added.

Union Minister Jitendra Singh, who cast his vote in Gandhinagar, said there was an enthusiasm among the electorate.

The Jammu parliamentary constituency has the highest number of 24 candidates among all the seats.

The constituency, spread over four districts of Jammu, Samba, Poonch and Rajouri and covering 20 assembly segments, was won by the BJP's Jugal Kishore in the 2014 general elections. He defeated veteran Congress leader and two-time MP Madan Lal Sharma by a margin of over 2.57 lakh votes.

Jugal Kishore is facing a tough contest this time as the National Conference has extended support to the Congress candidate and former minister Raman Bhalla, while the PDP has decided not to field any candidate from the Jammu region to ensure that the secular votes are not divided.

The Jammu parliamentary seat has the highest number of 20,05,730 lakh voters, including 9,64,834 women and 20 transgenders, officials said, adding 2,740 polling stations, including dozens near the LoC and the International Border (IB), were set up for the polling.