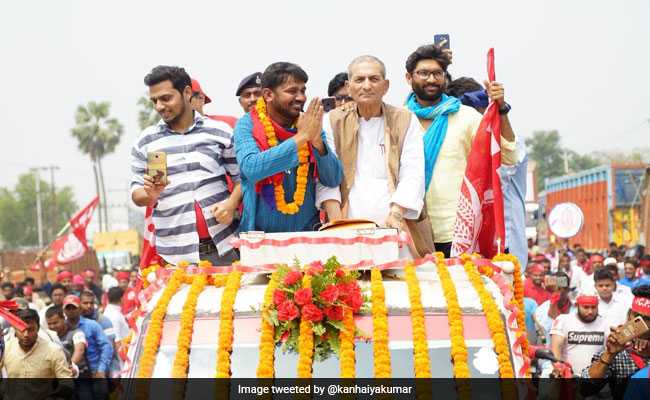 Bollywood actress Swara Bhaskar, civil rights activist Teesta Setalvad, Jignesh Mevani and Shehla Rashi were among those who arrived in the provincial town on the occasion.

Before leaving his house, the former student leader shared on social media, pictures of himself seeking the blessings of his mother and also Fatima Nafis, whose son Najeeb Ahmed went missing after a fight with ABVP activists.

En route to the collectorate where he reached in a massive procession, Kanhaiya Kumar also garlanded and paid tributes to renowned Hindi poet Ramdhari Singh Dinkar, who hailed from Begusarai district.

"My fight is against those who conspire to get the people dissipated in bogus polemics so that real issues of bread and butter, health and education and social justice could be pushed to the backburner. Giriraj Singh symbolizes such forces," he added.

A sedition case had been filed Kanhaiya Kumar following complaints that at a gathering organized inside JNU premises, in protest against the capital punishment awarded to Parliament attack accused Afzal Guru, anti-India slogans were allegedly raised.

Kanhaiya Kumar has been maintaining that he was innocent since he was present at the spot neither he was the organizer of the gathering nor did he shout any such slogans.