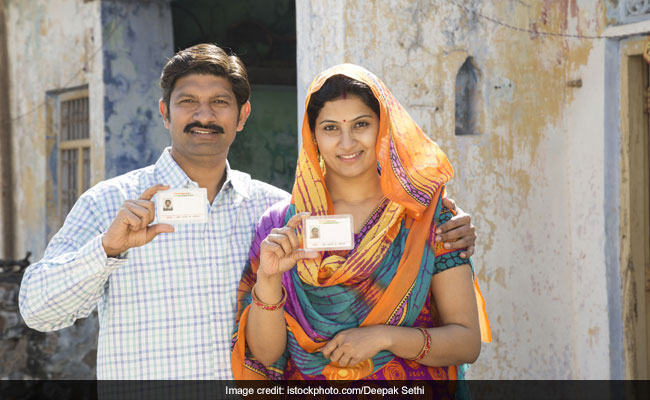 Election Results 2019: Voting is being held in seven phases. Results will be declared on May 23.

India is heading for Lok Sabha election 2019 - the world's largest democratic election exercise. According to Indian General Election 2019 schedule, the national election will be held in seven rounds from April 11 and the election results 2019 will be announced on May 23. This general election will choose the 17th Lok Sabha. The members of the largest party or coalition will then choose the Prime Minister. Election result date is four three days after the seventh phase. Assembly polls are also being held simultaneously in Andhra Pradesh, Sikkim, Arunachal Pradesh and Odisha, which would make it the largest elections to be held across the country in decades. Andhra Pradesh assembly elections took place on April 11, Sikkim Assembly elections and Arunachal Pradesh assembly elections were also held on April 11. Odisha assembly elections will take place in four phases. The election dates are April 11, April 11, 18, 23 and 29. Counting of votes is on May 23. For full general election schedule, click here. For full list of candidates, click here.

In this year's Lok Sabha election 2019, around 90 crore people are eligible to vote this time. The number is an increase of about 9 crore compared to last time. It is estimated that about 13 crore voters this time will be first-time voters. The actual number of people who do vote, however, is far less. Even though 2014 saw the highest turnout ever in independent India's history at 66.4 per cent, it meant a huge 27.3 crore people did not vote.

Two-thirds of Indians are under 35. With 43 crore Indians owning a smartphone, half a billion using the Internet, 30 crore using Facebook, 20 crore sending messages on WhatsApp and 3 crore users on Twitter, political parties and candidates will aggressively use new technology and social media to win the hearts and minds of young voters.

Holding elections in India, world's seventh largest nation by area and second most populous country is a complex process. The model code of conduct has already been put in place for this year's election where nearly 2,000 parties and over 8,000 candidates will be contesting elections for 543 seats. The model code of conduct is a set of guidelines that candidates, and political parties and governments must follow to keep elections fair.

Millions of poll workers, police and security personnel are deployed in cities, towns, villages and hamlets. They use planes, boats, trains, helicopters, elephants and camels and travel by foot to reach far flung voters, because every vote counts. Elections in India are nothing less than a "festival of democracy."

The first phase of Lok Sabha elections, that took place on April11, saw a voter turnout of of 69.43 per cent. A total of 91 Lok Sabha constituencies spread across 18 states and two Union territories had gone for polls in the first phase. The second phase of the Lok Sabha elections, that took place on April 18, saw 66 per cent voting. Bengal saw highest voting percentage of 76 per cent. Over 1,600 candidates contested on 95 seats in general election Phase 2.Phase 3 elections saw 66 per cent voting. The highest voting was recorded in Assam where 80 per cent people came up to vote. Bengal was close second with 79.36 per cent voting.

Around 90 crore people are eligible to vote this time, the Election Commission has said. The number is an increase of about 9 crore compared to last time. It is estimated that about 13 crore voters this time will be first-time voters. The actual number of people who do vote, however, is far less. Even though 2014 saw the highest turnout ever in independent India's history at 66.4 per cent, it meant a huge 27.3 crore people did not vote. The number of eligible voters has gone up by more than five times since the first general elections.

Lok Sabha Election 2019 will see over 13 crore first-time voters. These voters in the age group of 18-19 years constitute 1.66 per cent of the total electorate. Two-thirds of Indians are under 35.

Transgender persons enrol in the electoral rolls as "Others" on the gender category. This time, the number of electors enrolled as "others" gender is 38,325.

More than 10 lakh polling stations would be set up to conduct the Lok Sabha election 2019.

1,841 political parties recognised by the Election Commission will contest in Lok Sabha election 2019.

According to the New Delhi-based Centre for Media Studies, the Lok Sabha polling exercise, will cost an unprecedented Rs 500 billion.

2. You can search your name on Voter List by entering simple details about you - Name, Father or Husband's Name, Age, Date Of Birth, Gender, State, District and Assembly Constituency.

3. Alternatively, you can simply punch in your EPIC number, which is your Electoral Photo ID Card number. This number is mentioned in bold letters on your voter identity card. Also mention the State and you will be able to check your name, polling station and other details on the page.

Lok Sabha Election 2019: How To Register To Vote

Fill Form 6 that helps 'First time voters' and 'voters who have shifted to another constituency' and submit.

Upload your ID and address proof, and your photograph. Once all the details are filled in, simply scroll down and hit submit.

Offline registration, here's what you need to do:

What if I don't have a voter-ID card? Which government documents can I show while voting? 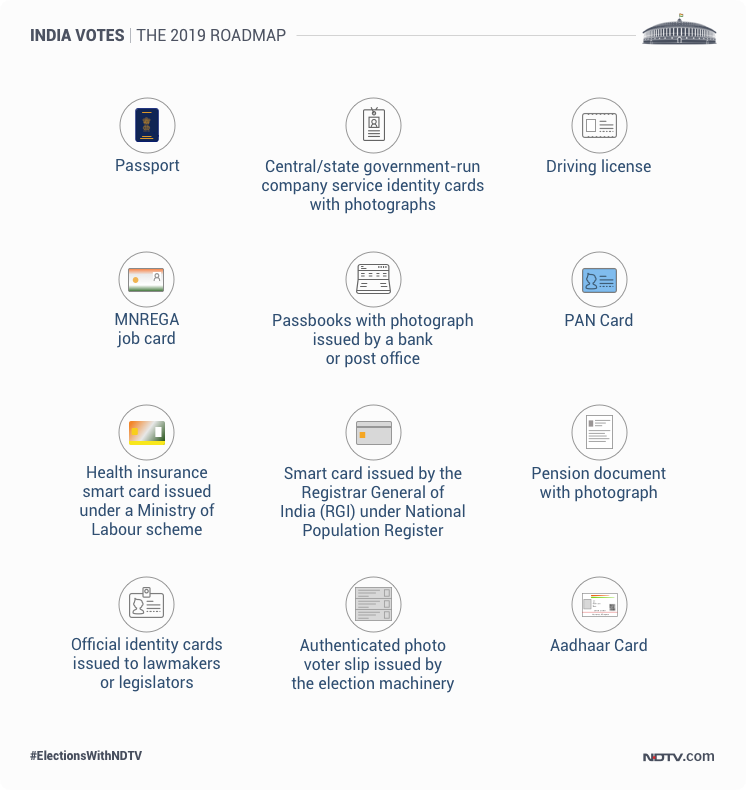 If don't have these, you can register both offline and online for a voter ID card. To register offline, you have to visit the state election office and request a Form 6. After filling in the necessary details and providing all relevant documents, you can submit the form to be issued the election ID at a later date. You can also register online by visiting the National Voters' Services Portal at www.nvsp.in

The two major national parties of India – the BJP and the Congress have launched their manifestos. While the BJP calls it "Sankalp Patra", the Congress has pitched it as voice of Indians. The BJP manifesto promises emphasis on national security, zero tolerance against terrorism and the creation of sustainable job opportunities. The manifesto reiterated the party's causes - a Ram temple in Ayodhya and the scrapping of Article 370, 35A dealing with special status to Jammu and Kashmir. Tax breaks for the middle class, welfare schemes for farmers, Rs 100 lakh crore investment in infrastructure are some its other poll promises.

The Congress, in its manifesto headlined the Nyuntam Aay Yojana (NYAY) scheme, which promises Rs 72,000 a year for 20 per cent of India's poorest. The opposition party promises farm loan waiver in other states on the pattern of Chhattisgarh, Madhya Pradesh, and Rajasthan. It also promises to review and replace the current Goods and Services Tax (GST) laws with a "GST 2.0 regime" based on a single, moderate, standard rate of tax on all goods and services.