"If Not Anand...": Gujarat Congress Candidate's Odd Prediction For Party

Bharatsinh Solanki, Anand Lok Sabha candidate, said if the Congress cannot win Anand Lok Sabha seat, in central Gujarat, then it can't win any of the 26 seats in the state. 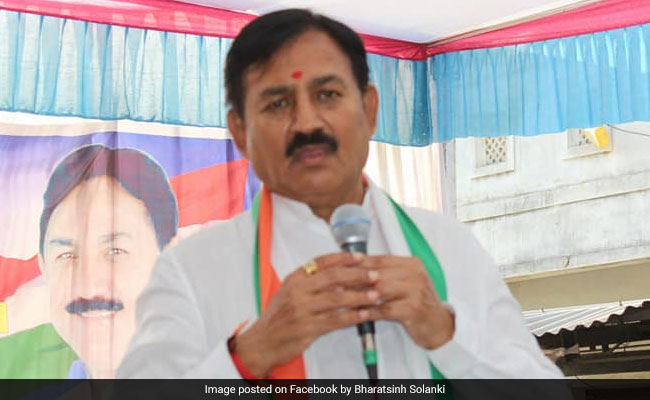 Bharatsinh Solanki belongs to the OBC Kshatriya Thakor caste, with over 7.5 lakh voters.

Bharatsinh Solanki, the Congress' Anand Lok Sabha candidate, is confident of wresting the seat from the BJP and claims it is his party's safest bet in Gujarat.

He said if the Congress cannot win Anand Lok Sabha seat, in central Gujarat, then it can't win any of the 26 seats in the state.

In the 2014 polls, the BJP had blanked out the Congress winning all 26 Lok Sabha seats. Anand, known as the milk capital of India and famous worldwide for the Amul dairy brand, is expected to see a close contest between Mr Solanki, two-time MP from here in 2004 and 2009, and the BJP's Mitesh Patel, a well known businessman making his poll debut.

Anand has traditionally been a Congress stronghold, the party having won from here ten times, while the BJP managed to wrest it in 1989, 1999 and 2014. Among the ten Congress victories, five belong to Mr Solanki's maternal grandfather Ishwar Chavda between 1980 and 1998.

While BJP's Mitesh Patel claimed people here will vote in favour of BJP as they want to see Narendra Modi as the Prime Minister again, Mr Solanki said basic issues such as lack of employment and farm distress would ensure a Congress win.

Though Mr Solanki, who had served as the state Congress president between 2015 and 2017, is upbeat, several voters of Dedarda village of Borsad taluka, from where Mr Solanki is registered as a voter, feel the BJP government's developmental works and "pro-people" decisions cannot be overlooked.

"The road passing from Dedarda is now a two-lane road. We have a school with classes till 10th standard. No doubt villagers have a soft corner for Mr Solanki as he is registered as voter from this village, but we cannot ignore the BJP government's schemes, such as free treatment under Rs 5 lakhs for the poor," said Mulji Solanki of Dedarda, a part of Petlad Assembly constituency.

Another villager alleged that Mr Solanki direct contact with the public was weak and this had led to his defeat in 2014.

"Congress MLA from Anklav and Mr Solanki's cousin Amit Chavda would have been a better choice. Unlike Mr Chavda, Mr Solanki does not believe in keeping in touch. When he was an MP and a minister, he hardly came here," said a roadside tea seller who did not wish to be identified.

Mr Chavda took over the reins of state party unit from Mr Solanki after the 2017 Assembly polls.

A samosa vendor in Napa-Talpad village of Borsad had a similar complaint against Mr Solanki. "Napa has a sizable Muslim population and the sarpanch is also Muslim. We normally support the Congress. But many of us have seen Mr Solanki does not even stop here or wave his hand to us if he passes from here. This is the biggest problem with him," said Shabbir Shaikh.

While Congress supporters are aplenty in the rural parts, the urban population of Anand and adjoining Vallabh Vidyanagar wants to go with the BJP to "strengthen national security".

"Just look at our roads and streets. They are neat and clean. The bus connectivity is good. The BJP has done a great job both at local and national levels. Only PM Modi can fight terrorism and make India a strong country," said Rakesh Patel, a college student.

Among these, Umreth and Khambhat are with the BJP while the rest are with the Congress. Mitesh Patel said sitting MP Dilip Patel''s works at the local level and PM Modi's decisions at the Centre will help BJP retain the seat.

"Our MP had spent his entire grant for various works in rural parts of Anand. People know him very well. Many roads in villages were built through his grants. He is constantly with me during campaigning. We have seen that people have made up their mind to make Modiji PM again," said Mr Patel.

Mr Solanki, while admitting that he could not remain in touch with people in the past due to party responsibilities, claimed the Congress would win as people have lost trust in BJP.

"When you become party president, it is obvious you can't run the party from your home in Borsad as some things change with such responsibilities. Otherwise, I am very much in touch with my people," he said.

"If not Anand, then Congress cannot win any other seat," said a confident Mr Solanki.

Though caste equations are in the Congress' favour, the BJP candidate Mitesh Patel claims it does not come into the picture as his party won from here in 1989, 1999 and 2014.

Mr Solanki, on other hand, said his chances of victory are better as there are no Muslim candidates in the fray, unlike in 2014 when there were two Independent candidates from the minority community.

Polling for all 26 seats in the state will take place on April 23.

NDA Will Get Two-Thirds Majority In Bihar: Dharmendra Pradhan