Babul Supriyo, the BJP candidate from the Asansol Lok Sabha constituency, is contesting against the Trinamool Congress' Moon Moon Sen. 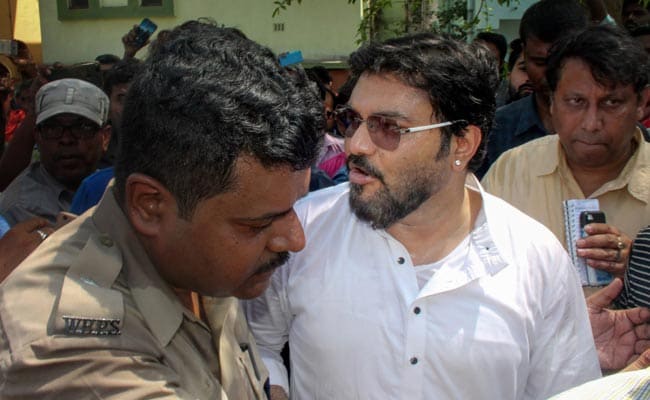 Babul Supriyo entered into a heated argument with election officials in a polling booth.

The Election Commission today directed the West Bengal police to register a case against Union Minister Babul Supriyo for allegedly entering a voting booth and threatening officials during the fourth phase of the Lok Sabha polls, news agency ANI reported.

Sources said the initial disagreement occurred when BJP workers insisted that election officials launch the voting process only after central security forces have arrived. The situation soon turned violent, forcing the police to intervene. Photographs of the incident showed Babul Supriyo sitting in a car with the rear windows smashed.

Reports suggested that the 48-year-old leader had a heated argument with polling officials inside a booth, following which Trinamool Congress supporters vandalised his vehicle.

The politician tweeted details of several polling booths which, according to him, were affected by "violence and brutal intimidation" by Trinamool Congress members. "Voters are not being allowed to vote. Our fight is to establish democracy. It is shameful that I am saying this in a democratic country," he told reporters later, alleging that booth capturing was rampant in the state.

Moon Moon Sen, however, shrugged off questions on the violence in a most nonchalant fashion. "They gave me my bed tea very late, so I woke up very late. What can I say? I really don't know," the 65-year-old former actor told NDTV.

"Don't say his name. please. I won't talk then," she cautioned, when asked to comment on Babul Supriyo's allegations.

The BJP leader had notched an unlikely victory against the Left in the 2014 elections. Moon Moon Sen, who defeated nine-time lawmaker Basudeb Acharia in Bankura the same year to earn the "giant-killer" title, has been moved to Asansol as part of the Trinamool Congress' strategy to wrest it from the BJP.