Will Contest Against BJP If Kirit Somaiya Gets Ticket: Sena Legislator

Shiv Sena legislator Sunil Raut, brother of senior Sena leader Sanjay Raut, said he is not opposed to fielding any other candidate from the seat. 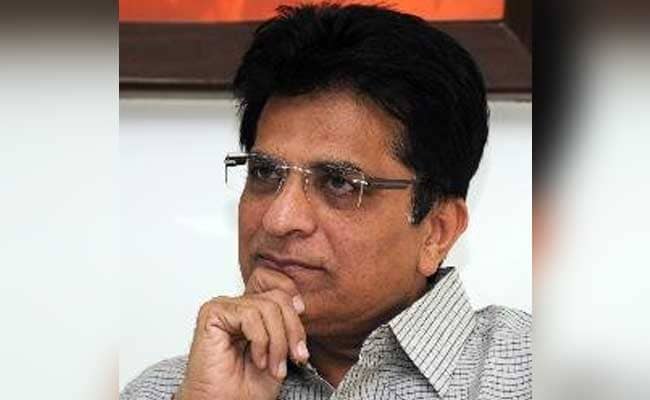 A Shiv Sena legislator has threatened to contest the April-May national election against ally BJP in Mumbai North East constituency if sitting parliamentarian Kirit Somaiya is fielded from there. The opposition to Mr Somaiya's candidature has roots in his rivalry with Shiv Sena chief Uddhav Thackeray, which flourished when the two parties had been on a war path.

Shiv Sena legislator Sunil Raut, brother of senior Sena leader Sanjay Raut, said he is not opposed to fielding any other candidate from the seat.

"Due to the allegations levelled by Somaiya against Thackeray in the last 3-4 years, not only Shiv Sena, but the people of the constituency and all Marathi-speaking people are opposing him. Even if he is given a ticket by mistake, I assure you that the BJP will lose the seat," he was quoted by news agency PTI as saying.

"Somaiya has not maintained any ties with the people of his constituency...We see ''Matoshree'' (Mr Thackeray's residence) as a temple. But if he makes allegations against it and calls (Thackeray) a mafia don, there cannot even be an attempt to give him a ticket," he added.

The Shiv Sena had been at loggerheads with the BJP after the 2014 general election, opposing the party on a host of issues. During the years of acrimony, Mr Somaiya had attacked Mr Thackeray on many occasions.

In 2016, Mr Somaiya responded to Mr Thackeray's dare to Prime Minister Narendra Modi to conduct "surgical strikes" on Swiss banks to bring back black money. He said Mayawati, Mulayam Singh Yadav and Uddhav Thackeray should clarify if they were worried about poor people or those with "boxes of money".

He had also said that he would expose "mafia" in Municipal Corporation of Greater Mumbai and take on their "godfather".

In October that year, Mr Somaiya had alleged that he was assaulted by Shiv Sena workers. 13 people were arrested in the case.

Ahead of the Lok Sabha election, the Shiv Sena and the BJP ironed out their differences. However, there is no end to the acrimony between the Sena leadership and Mr Somaiya.

News agency PTI reported that Mr Somaiya had recently sought time for a meeting with Mr Thackeray and Sanjay Raut-- both of them had reportedly refused to meet him.

The BJP leadership is reportedly considering Mr Somaiya for the constituency. In 2014, he had defeated Sanjay Dina Patil of the NCP.