Election 2019: "Conspiracy To Kill Me," Says Tej Pratap Yadav After Journalist Is Beaten

A video showed a video journalist being thrashed by two to three guards after he allegedly broke the windscreen of Tej Pratap Yadav's car. 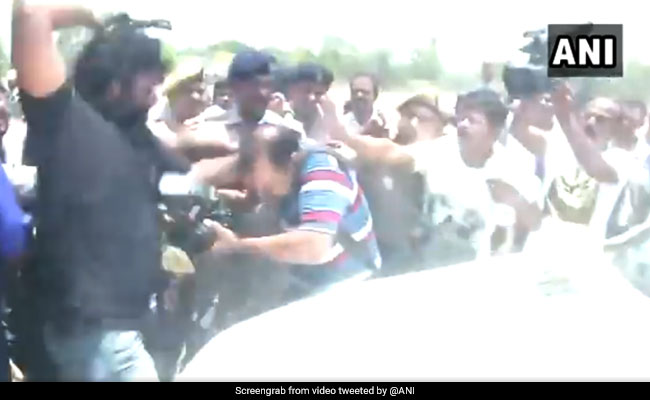 Lok Sabha Election: A journalist was beaten outside the polling booth where Tej Pratap Yadav voted.

Bihar politician Lalu Yadav's rebel son Tej Pratap has denied that his security guards thrashed a video journalist in Patna on Sunday as voting in the Lok Sabha election entered its final day. He called it a "conspiracy to kill" him.

The clarification from Mr Yadav came after a video showed a man being thrashed by two to three guards after he allegedly broke the windscreen of the politician's car in the media scramble when he reached his polling station to vote.

"My bouncers have not done anything. I was leaving after casting my vote when a photographer hit the windscreen of my car. I have filed an FIR in the incident. A conspiracy is being hatched to kill me," Mr Yadav told reporters.

#WATCH Tej Pratap Yadav's personal security guards in Patna beat a camera person after he allegedly broke the windscreen of Yadav's car. Tej Pratap Yadav was leaving after casting his vote. Yadav has filed an FIR in the incident. #Biharpic.twitter.com/u1KzKDCGBG

In the video, the police can be seen trying to stop the guards from beating the video journalist.

Tej Pratap Yadav, the older brother of Bihar leader of opposition Tejashwi Yadav, has been sulking over his unfulfilled demands in the naming of Rashtriya Janata Dal (RJD) candidates for the national election starting April 11.

The 30-year-old had also launched a new political front in the name of his parents, called the ''Lalu-Rabri Morcha'', and threatened to field separate candidates in the national election. Tej Pratap Yadav has also been taking potshots at his younger brother who as seen as more politically astute and a natural heir to their father's political legacy.

"I am the second Lalu Yadav in Bihar," he had declared at a rally this month, staking his claim on his father's political legacy.