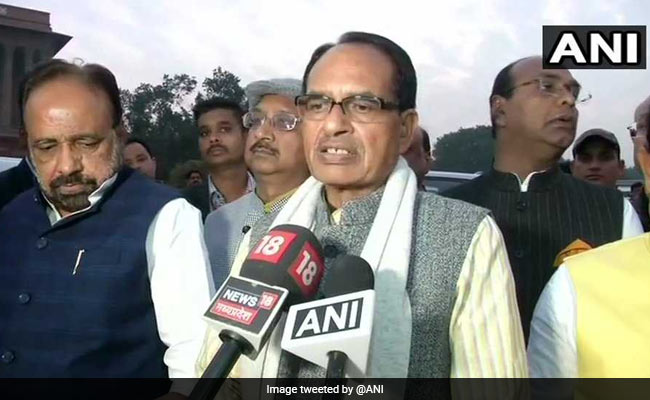 Former Madhya Pradesh Chief Minister Shivraj Chouhan on Monday took a jibe at Rahul Gandhi for his "back foot-front foot" comment at a Patna rally, and said that the nation was not a cricket field and the Congress President should not play with its future.

Mr Chouhan's jibe at Gandhi came a day after the Congress leader was at his aggressive best and said his party would henceforth "play politics on the front foot and not the back foot" while addressing its Jan Akanksha rally on Sunday.

"Rahulji bringing in new rhetoric into play. He is promising left, right and centre. Suddenly he is promises galore.

"Now he is talking about playing politics on front foot. The country is not a 22-yard cricket pitch that he will play on front foot and hit the ball out of the stadium," the Bharatiya Janata Party leader said.

Taking a swipe at the opposition who have been trying to align ahead of the Lok Sabha polls, Mr Chouhan added that the nation's best option remains Prime Minister Narendra Modi.

"It is people like Modiji who is the need of the hour; who will work hard tirelessly for the nation," Mr Chouhan said here at the BJP office while launching 29 digital raths from here for each state.

Slamming the Congress for its farm loan waiver tactics in the three states of Chhattisgarh, Rajasthan and Madhya Pradesh, where it snatched away power from the BJP, Mr Chouhan who was ousted after 15 years in power, said: "Congress government in the state is just fooling farmers with loan waivers.

"All they have done till now, is get the poor lot to sign a number of colourful papers. No money has been credited to their accounts yet."

The Congress's Jan Akanksha rally was a show of unity of "like-minded parties" that was a must to defeat the Modi government in the Lok Sabha election, Mr Gandhi said at the rally that was also attended by its allies including the Rashtriya Janata Dal.

It was the first time in many years that the Congress organised a rally in Bihar on its own.