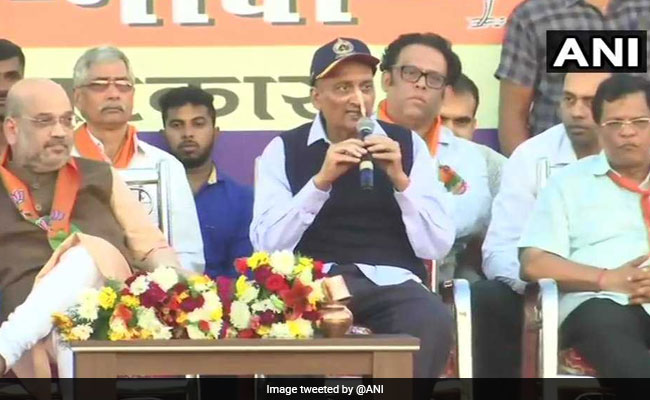 Hinting at a more active role in the campaign for the upcoming Lok Sabha elections, the Goa Chief Minister Manohar Parrikar today said he would be making longer speeches on the campaign trail.

The announcement comes at a time when ruling BJP leaders as well as those from the opposition have questioned his ability continue as the Chief Minister and lead the campaign, in view of his prolonged treatment for advanced pancreatic cancer.

"I will not give a big speech. I will reserve those for elections," Mr Parrikar said at a meeting of the Bharatiya Janata Party's (BJP) booth workers, chaired by party President Amit Shah.

According to state BJP President Vinay Tendulkar, Mr Parrikar who makes rare public appearances on account of his poor health, was not scheduled to attend the rally, held at the outskirts of Panaji, but reached there in the company of Amit Shah.

Manohar Parrikar had to be assisted to climb the stairs to the stage and was accompanied by a government surgeon, who was holding an urinary drainage bag attached to a catheter.

The chief minister's speech lasted barely a couple of minutes, in the course of which he tried to pump up the morale of the party workers.

"Let us all come together, forget small difference and let us fight to make (Narendra) Modi our Prime Minister once again," Manohar Parrikar said.

Mr Parrikar has been ailing from advanced pancreatic cancer and was recently discharged from the New Delhi-based All India Institute of Medical Sciences (AIIMS) earlier this week. He has been in and out of hospitals in Goa, Mumbai, New York and Delhi, ever since he was diagnosed with cancer in February 2018.