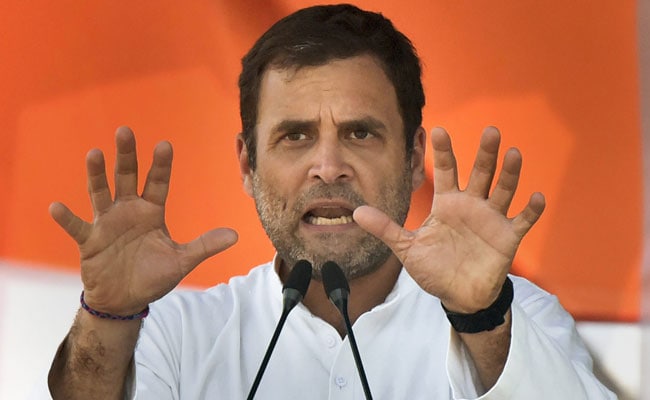 Rahul Gandhi was addressing a rally in Haryana (File)

Prime Minister Narendra Modi's television interview last year in which he had remarked that a person selling pakodas cannot be considered unemployed, was mocked by Congress President Rahul Gandhi, who taunted that PM Modi had come down from 'Make in India', 'Start Up India' to selling pakodas within years.

"Initially, he talked about Make in India, then Startup India, then Stand-Up India and finally he ended on pakodas," Mr Gandhi said at a rally in Haryana on Thursday.

PM Modi's remark in the interview had triggered a debate. It had trended on social media under the hashtags #pakodanomics, #PakodaRojgar, #Pakoda and #Pakodafor2019. The sharpest attack had come from Congress leader P Chidambaram, who had said if selling pakodas was a job, begging was also an employment opportunity by the same logic.

While the government says the initiatives, aimed at spurring entrepreneurship and manufacturing in the country, were a success, the opposition says nothing much was achieved by them.

Mr Gandhi also cited a leak statistical report that claimed unemployment was highest in the country in 45 years. "This is Modi's contribution," Mr Gandhi was quoted by news agency PTI as saying.

"I want to ask you what you have done in the last five years. What have you given to the country?" added.

The country's unemployment rate was at a 45-year-high of 6.1 per cent in 2017-18, according to the National Sample Survey Office's (NSSO's) periodic labour force survey (PLFS), which had been accessed by the Business Standard newspaper in January this year.

The government had debunked the report, terming it an unverified draft.

"If 7.5% is the real growth in Gross Domestic Product, and inflation is at 3-4%, the nominal growth needs to be around 11-12%. It would be absurd to say that there are no jobs in such a scenario," Union Minister Arun Jaitley had said.

Prime Minister Narendra Modi, in the run-up to the 2014 elections, had promised 2 crore jobs every a year, a promise, the opposition alleges, was not fulfilled.