LK Advani, Not A Candidate For First Time In 20 Years, Votes In Ahmedabad

LK Advani, who was Deputy Prime Minister in the BJP government that Atal Behari Vajpayee led nearly two decades ago, was hurt at the way he was pink-slipped. 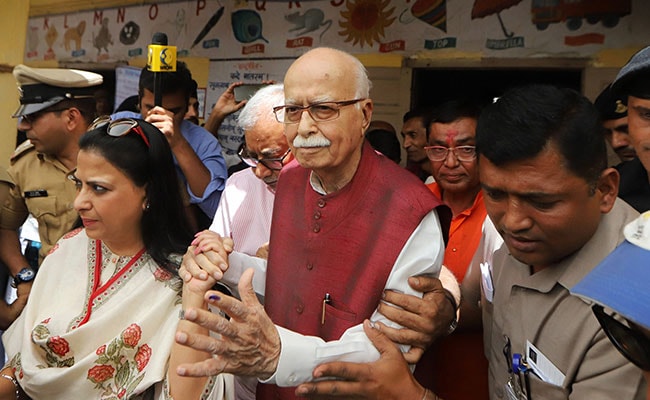 This was the first national election in decades in which veteran BJP leader LK Advani voted but was not a candidate himself. The party's founding member, who was benched by its current leadership, turned up at a polling booth in a local school in Ahmedabad and exercised his voting right.

In 2014, Mr Advani had escaped the BJP's rule that it would not field leaders above the age of 75. He and another party veteran Murli Manohar Joshi contested and won. It was Mr Advani's sixth win from the Gandhinagar constituency. While the BJP scored big in those elections, the old-timers were eased out of decision-making and made members of a mentors' club, the "Margadarshak Mandal".

This time he had to make away for Amit Shah, the BJP chief, who filed his papers from Mr Advani's constituency.

Mr Advani, who was Deputy Prime Minister in the BJP government that Atal Behari Vajpayee led nearly two decades ago, was hurt at the way he was pink-slipped.

Sources had said more than the idea that he would not be in parliament for the first time in decades, Mr Advani was hurt that the emissary of the news was not BJP president Amit Shah but a lower functionary.

Mr Advani broke his silence last month in a blog titled "Nation First, Party Next, Self Last", in which he said that the party never regarded its critics as "enemies" or "anti-nationals". In the piece, he urged the party to "look back, look ahead and look within" and stressed on "democracy and democratic traditions" within.

Before releasing the manifesto earlier this month, Mr Shah met upset veterans LK Advani and Murli Manohar Joshi in Delhi to bring them on board at a time a time the opposition had been attacking the BJP leadership for benching their "gurus".

LK Advani had not contested in the 1996 Lok Sabha polls. He, however, contested in 1998 bypoll from Gandhinagar and won.