PM Modi was to blow the poll bugle for the state at the meeting, named "Shanknaad" - or the blowing of conch shells - to indicate just that. 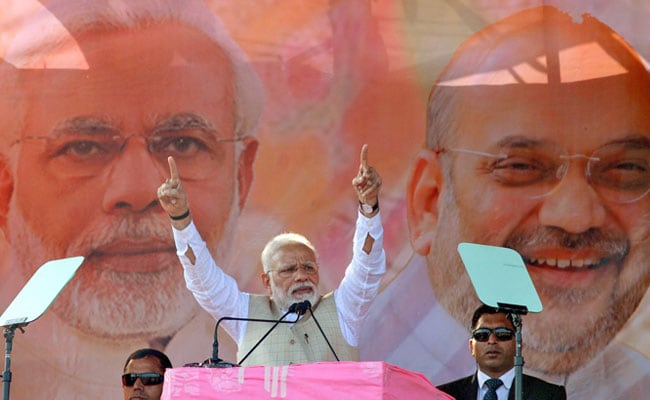 Prime Minister Narendra Modi on Thursday addressed a rally here by mobile phone after bad weather stopped him from reaching the venue.

PM Modi was to blow the poll bugle for the state at the meeting, named "Shanknaad" - or the blowing of conch shells - to indicate just that.

PM Modi arrived at Dehradun's Jolly Grant airport on schedule at about 7 am, and was to travel ahead by helicopter.

He waited there for over four hours for the weather to clear up for the Mi-17 helicopter to take off.

The prime minister left by helicopter for Kalagarh at 11.15 am, and then travelled to the Dhikala zone of the Corbett Tiger Reserve.

But he could not go beyond Dhikala as the weather turned bad in the afternoon once again, prompting him to address the meeting on phone.

The prime minister apologised to the people who stayed put at the Rudrapur venue despite the intermittent rain.

"I am unhappy that despite having come to Uttarakhand, I could not reach in your midst because of bad weather. Still, you are waiting to listen to me," he said.

During the four hours he spent at the Corbett Tiger Reserve, the prime minister announced the launch of a tiger safari at Pankhrau between Kotdwar and Kalagarh.

He discussed tiger conservation with the reserve officials, also asking them about incidents of man-animal conflict.