PM Narendra Modi felicitated at the party headquarters in Delhi.

New Delhi: Prime Minister Narendra Modi celebrated the BJP's victory in Uttar Pradesh and Uttarakhand at the party headquarters in New Delhi. Following the celebrations, Mr Modi attended a meeting of the BJP's parliamentary board. Prime Minister Narendra Modi had carried out two road shows in his Lok Sabha constituency of Varanasi as part of his election campaign in Uttar Pradesh, a week ago.

Yesterday, BJP president Amit Shah said that the party's parliamentary board members will meet at their 22, Ashoka Road headquarters to select chief ministers for Uttar Pradesh and Uttarakhand. The party will also analyse the political scenario in Goa and Manipur and accordingly, formulate a strategy for government formation.

The party decimated the Samajwadi Party-Congress alliance and Mayawati's Bahujan Samaj Party in Uttar Pradesh, winning 325 of the total 403 assembly seats in the state. In Uttarakhand, the BJP secured decisive 57 of the 70 assembly constituencies. Despite the party emerging as the second largest party in Manipur and Goa, it could form a government in these states with the support of regional parties. 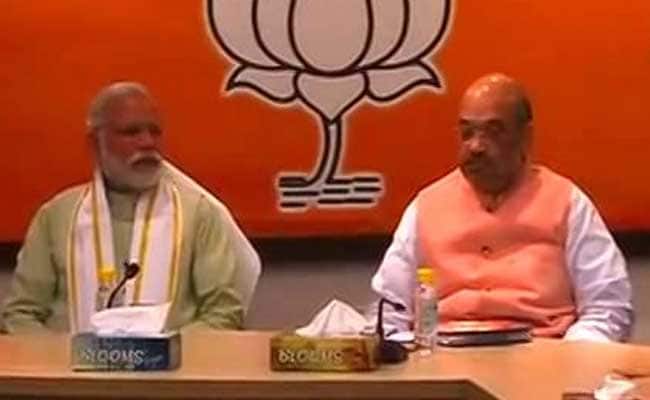 The parliamentary board will select chief ministers for Uttar Pradesh and Uttarakhand as well as analyse results and accordingly, strategise for Manipur and Goa.
Mar 12, 2017 18:47 (IST)
PM Narendra Modi addressing supporters at the party headquarters 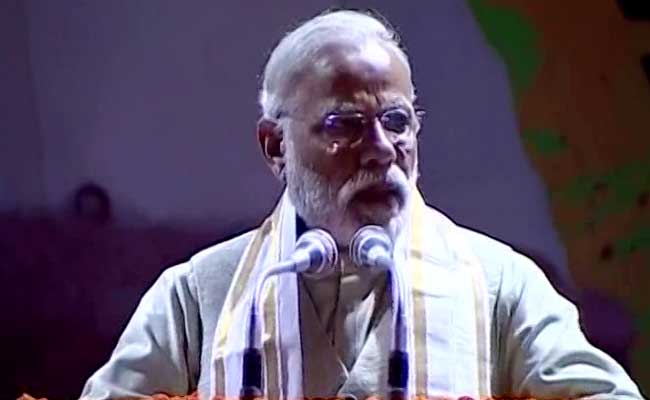 I wish everyone a very, very Happy Holi.

Holi inspires us to destroy all shortcomings. It give us the strength to go forth with our schemes for the betterment of mankind

Besides electing governments, elections are also an event for creating awareness.

That is very important for a country like India.

People are coming to vote in large numbers and celebrating the festival of democracy.

Such an emphatic win after a record turnout is special and it makes everyone think.

Earlier, parties were scared to fight elections on the agenda of development.

Today, I am witnessing a new India.

New India - India of the dreams of the youth.

New India - India that fulfills the aspiration and dreams of its women.

New India - An India that enables and provides the poor ample opportunity to progress.

This is the foundation of a new India. The poor does not want appeasement.

We also have the responsibility to be humble. Power is not about posts.

It is an opportunity to serve. This mandate is people's order to us to serve.

This inspires us to work harder.

Atalji, Advaniji have sown the seeds in the country to see this result.

The election results are also an emotional issue for us as this year marks the centenary celebrations of Deen Dayal Upadhyaya. Uttar Pradesh was once his 'karmabhoomi'.

I can identify the power of the poor. If we empower them, the country would progress.

Today, the middle class has to suffer. Once the poor is empowered, the burden on middle class would disappear.

Together, the strength of the poor and the aspirations of middle class will take the nation to new heights.

The party has performed well and our party chief Amit Shah and our workers must be encouraged.

Amitbhai has ensured that the ideology of BJP reaches the world.Through the membership drive, the BJP has become the largest political party in the world.

We must be proud to be associated with the biggest democratic party in the world. This is  a golden era for the BJP.

This golden era was not achieved easily. Hard work, penance and sacrifices were followed by all goal-oriented people.

We wanted to do something for India.

I am not someone who looks at things from an electoral perspective. I see things from the perspective of people. I bear the interests of 125 crore Indians.

All parties have served this country in various ways. We acknowledge their work.

2022 will mark the 75th year of India's independence. If everyone bears the mood of development, then all our dreams and progress would be achieved. This is the environment we need to create.

This was boosted by the mandate in these five states.

I thank the people of the five states and tell them that we won't let down the faith you have placed in us. BJP leaders will never let you down.

I want to repeat something I said 2.5 years ago.

We are new. Our experience is fresh. We may make mistakes. But our intent will never be incorrect.

I am happy to be the kind of Prime Minister who is asked, "Itna kaam kyun karte ho? (Why do you work so much?)"

They ask why I work so hard, I say we will always work hardest. We serve the people.

A government is made with 'bahumat' (majority) but it runs through 'sarvamat' (unanimity). Ours is a government for all.

The government has no right to discriminate and the BJP will never do this.
Mar 12, 2017 18:38 (IST)
BJP chief Amit Shah addresses supporters at the party headquarters 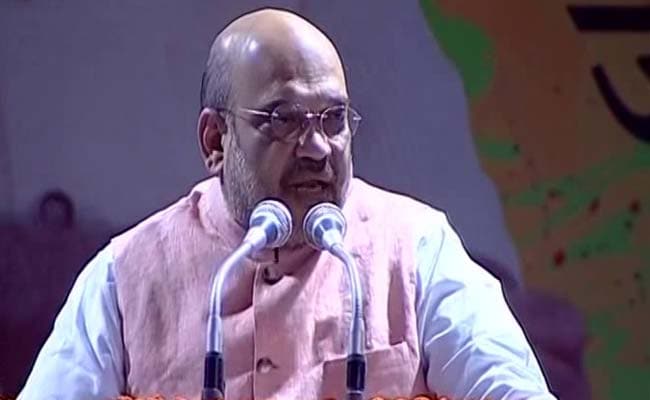 Firstly, I would like to wish everyone a very Happy Holi. This Holi has been very bright and auspicious for the country and BJP.

The win in UP is unprecedented. We will form the government with a comfortable majority.

In Uttarakhand, we have won with 3/4 majority. People of Goa and Manipur have supported us and our performance has been brilliant.

PM Modi has really worked hard. When he was chosen as the PM candidate, he said that BJP is a party for the poor, for Dalits.

It was not just rhetoric but an ambition. We have provided electricity and Jan Dhan accounts to the poor.

During the election campaign, I saw people's faith in PM Modi.

For the first time since independence, a leader has come out with such schemes for the poor.

We will not let the people down. We will ensure that Modi wave goes all over the country. 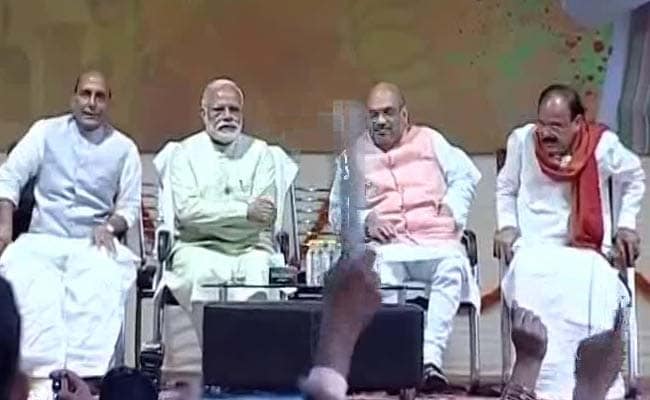 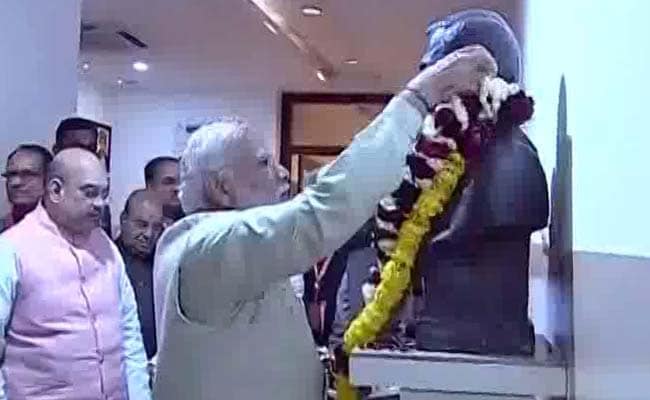 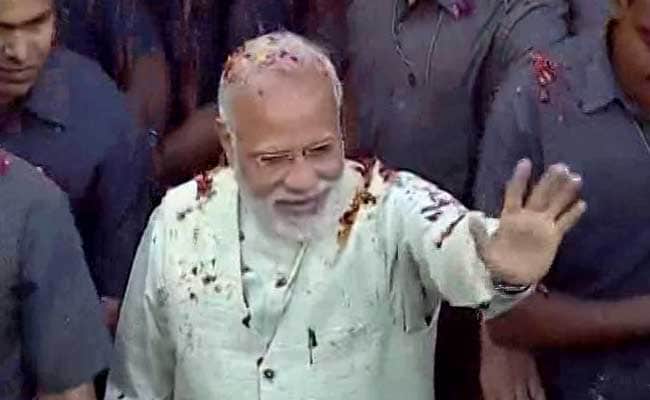 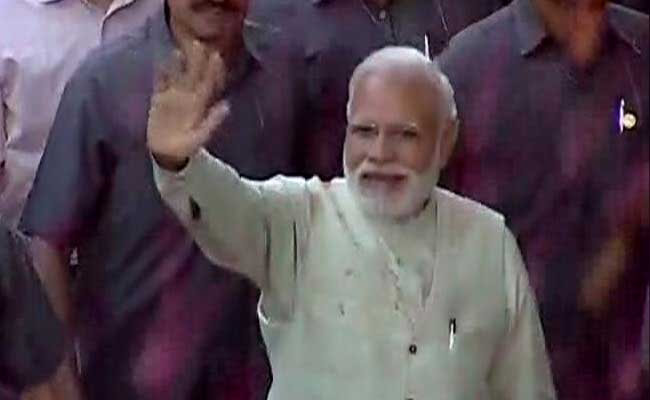 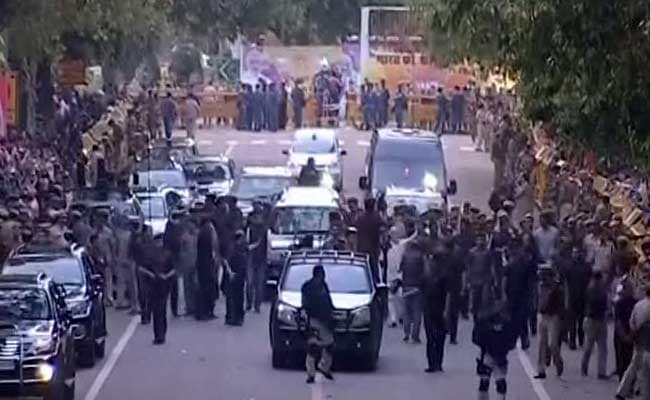 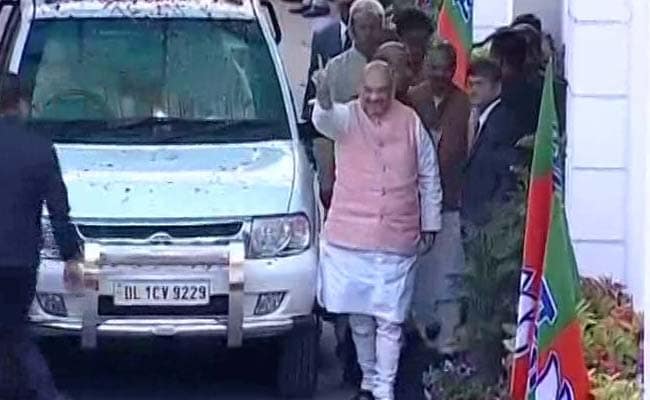 He will also participate in the party's parliamentary body meeting to discuss chief ministerial candidates for Uttar Pradesh and Uttarakhand.
Mar 12, 2017 17:56 (IST)
BJP leaders and supporters awaiting the arrival of PM Narendra Modi 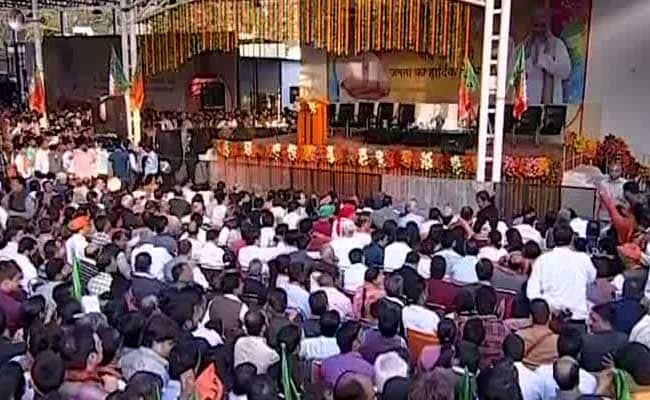 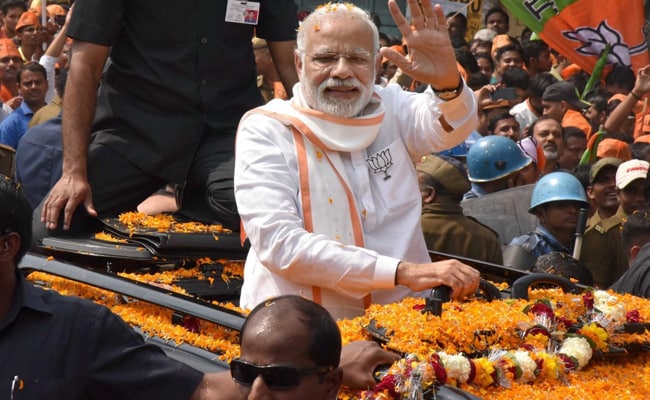 For three full days, the PM camped out in the holy city of Varanasi, walking the ancient streets and stopping at temples to seek blessings
Mar 12, 2017 17:21 (IST)
Senior BJP leaders, ministers attend the party's victory drive 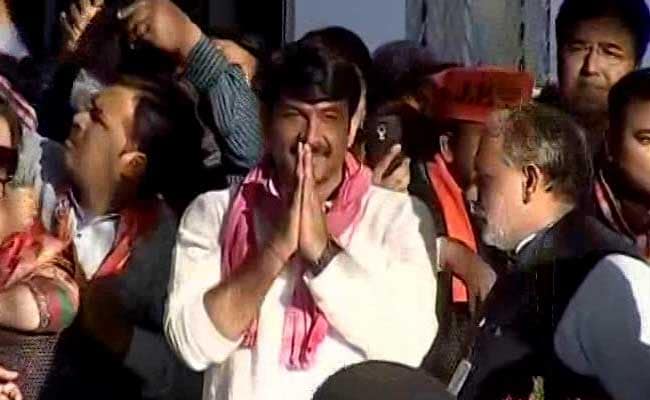 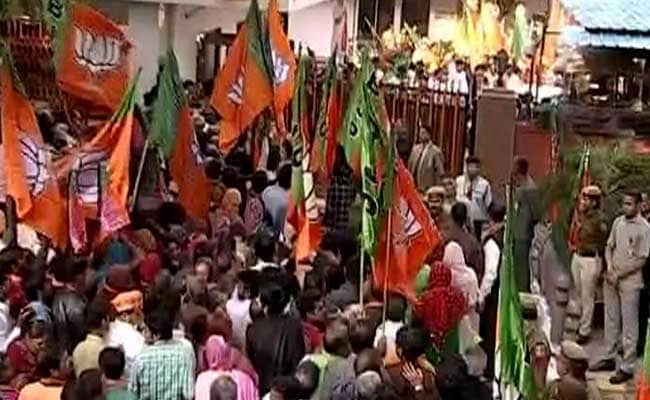 The party has won absolute majority in UP and Uttarakhand whereas it could form a government in Goa and Manipur with the support of regional parties.
Mar 12, 2017 16:34 (IST)
Election Results 2017: BJP Reception For PM Narendra Modi In Evening - And Uttar Pradesh Decision BJP has asked workers to line up the streets starting Windsor place - roundabout till the BJP's office at Ashoka Road.