Prime Minister Narendra Modi has been formally elected as leader of the National Democratic Alliance or NDA at a meet of the victorious BJP-led alliance in the central hall of parliament today.

PM Modi was also elected as the leader of the BJP Parliamentary Party.

Prime Minister Narendra Modi has been formally elected as leader of the National Democratic Alliance or NDA at a meet of the victorious BJP-led alliance in the central hall of parliament today. Leaders of the NDA one by one spoke in the central hall and supported the move to elect PM Modi. The PM was also elected as the leader of the BJP Parliamentary Party. Senior BJP leaders LK Advani and Murli Manohar Joshi are also present at the NDA parliamentary meeting. Yesterday, the council of ministers led by PM Modi submitted their resignation which was accepted by President Kovind, paving way for formation of new government. Accepting PM Modi's resignation, the president had had asked them to continue as a caretaker until the formation of a new government. PM Modi is expected to take oath for his second term next week.

Here are the highlights of PM Modi's address after being elected NDA leader:

Watch | PM Modi's advice for those elected for the first time pic.twitter.com/vS0DqeUFjg

"These days nothing is off record": PM Modi's advice to lawmakers in his address

"Have seen many elections, but this was different": PM Modi at NDA meet

"2019 elections was 'tirth yatra' (pilgrimage) for me, the people are just like the gods": PM Modi pic.twitter.com/on8FSMwmG2

"We have to go forward with this slogan of 'NARA' - National Ambition and Regional Aspirations": PM Modi pic.twitter.com/QBpqXAphfe 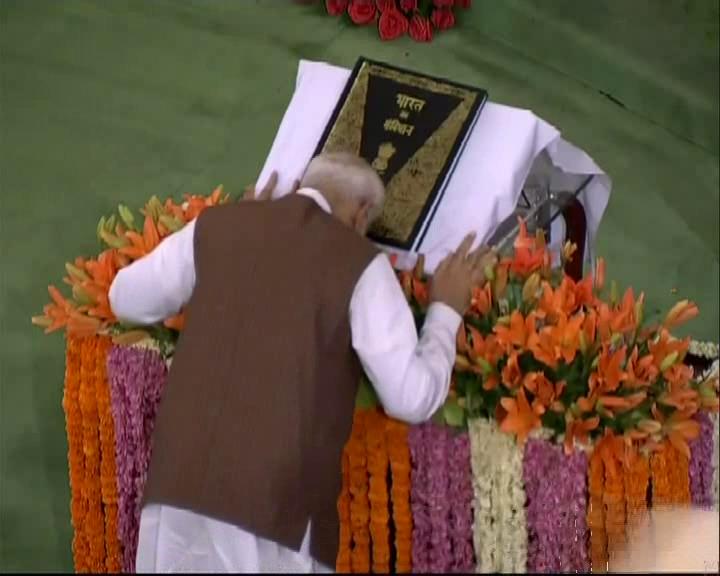 May 25, 2019 18:21 (IST)
"I am happy to announce that the BJP parliamentary party has unanimously elected Narendra Modi as its leader," BJP President Amit Shah announced. In the just-concluded parliamentary polls, the BJP scored a resounding victory, taking home 303 out of 542 seats. The Congress, led by Rahul Gandhi, faced an epic failure with just 52.
May 25, 2019 18:21 (IST)

Delhi: Senior BJP leader Murli Manohar Joshi greets Narendra Modi, after he was elected as the leader of BJP & NDA at the NDA meeting. pic.twitter.com/B9e1Z4vO5C

Delhi: Narendra Modi seeks blessings from senior BJP leader LK Advani, at the NDA meeting. He has been elected as the leader of BJP & NDA. pic.twitter.com/WfKKWEDc3j