The decision has come as a relief to the Palaniswami government, which will not come under the threat of proving its majority in the assembly for now. 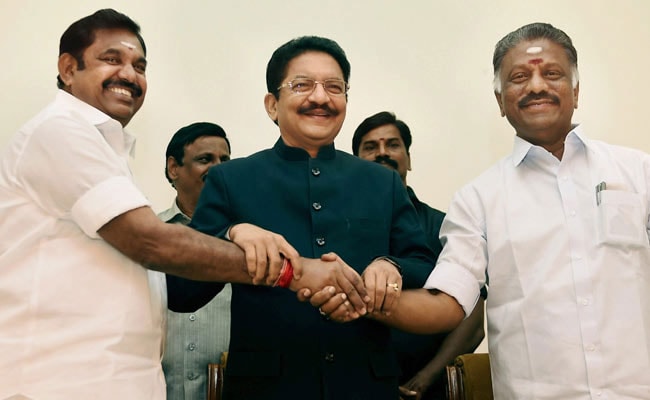 Chennai: The Madras High Court has delivered its verdict today on the disqualification of 18 legislators in September by Tamil Nadu assembly speaker P Dhanapal. The disqualified legislators, in a letter to then governor C Vidyasagar Rao, had withdrawn support to Edappadi K Palaniswami while making it clear that they were not withdrawing their support to the AIADMK government.

The High Court earlier did not stay the Speaker's move but put the floor test on hold and directed that the 18 seats be kept vacant till its final orders. The ruling

The decision has been referred to a third judge, whose name will likely be decided by Huluvadi G Ramesh, the second senior-most judge of the Madras High Court.

The decision has come as a relief to the E Palaniswami government, which will not come under the threat of proving its majority in the assembly for now.

Here are the highlights of Madras High Court's verdict on the 18 disqualified AIADMK MLAs:

Jun 14, 2018 18:07 (IST)
"I feel dissatisfied that the verdict has facilitated in giving two or three months of extension to the anti-people government in Tamil Nadu. Even people are dissatisfied," TTV Dhinakaran said reacting to the court order.
Jun 14, 2018 14:51 (IST)
For TTV Dhinakaran, the Madras High Court verdict comes as a setback, as he will have to hold his flock together. As of now, TTV Dhinakaran is elected in the assembly as an independent candidate from the RK Nagar constituency.
Jun 14, 2018 14:12 (IST)
The name of the third judge will likely be announced by Huluvadi G Ramesh, the second senior-most judge of the Madras High Court.
This could have larger implications as the lawmakers had not said that they were giving up membership of the AIADMK. They had instead said they didn't have trust in the Chief Minister.
Jun 14, 2018 14:09 (IST)
TTV Dhinakaran believes that he has not violated the anti-defection law. They say that they had only asked for replacing the Chief Minister, in their letter to the governor.
Hence, they were confident the court would quash the order disqualifying the 18 AIADMK lawmakers.
Jun 14, 2018 13:59 (IST)
The 18 lawmakers will not be able to attend the assembly. It is a setback for TTV Dhinakaran.
TTV Dhinakaran was expecting an order quashing the disqualification. Their letter to the governor, the lawmakers said, reflected only a "lack of trust" against the Tamil Nadu Chief Minister.
Jun 14, 2018 13:56 (IST)
The 2019 elections are coming up. This gives time to the Tamil Nadu government to consolidate their position. The Chief Justice had said in court that a third judge will be named.
Jun 14, 2018 13:54 (IST)
The Chief Justice of the Madras High Court has upheld the disqualification of the lawmakers.
Justice M Sundar has given a dissenting verdict, saying that it is "wrong". It is a split verdict from the Madras High Court.
The verdict has been referred to a third judge. Therefore, the 18 lawmakers will continue to remain disqualified.
A detailed copy of the verdict, which is awaited, will spell out a further timeline into the matter.
The verdict will be a setback for TTV Dhinakaran and is a relief for the current Tamil Nadu government.
At the moment, by-polls for the 18 seats of the disqualified lawmakers will not be held, as a verdict from a third judge will be awaited.
Jun 14, 2018 13:36 (IST)
The two-judge bench of the Madras High Court is currently reading out the judgement for the 18 disqualified AIADMK MLAs.
Jun 14, 2018 12:55 (IST)
"We Did Not Do Any Mistake, We're The True AIADMK" Says Disqualified Lawmaker Thanga Tamilselvan
Disqualified Tamil Nadu lawmaker Thanga Tamilselvan, elected from Tamil Nadu's Andipatti (Theni) constituency, said that he along with the other rebel lawmakers, were "100 per cent confident of victory".
He also said that the rebel lawmakers were the "true AIADMK" and that they did not commit "any mistake", adding that many lawmakers would come to their side if the verdict is in their favour.
Jun 14, 2018 11:52 (IST)
"Eagerly waiting for judgement," says DMK spokesperson A Saravanan
DMK spokesperson A Saravanan has said that the party is "eagerly waiting for this judgement". He said that the DMK is confident that the Madras High Court will declare cancel the speaker's decision to disqualify the lawmakers and ensure that they will return to the assembly.
He said that the DMK had "already wanted a floor test" to be conducted by the Tamil Nadu governor C Vidyasagar Rao.
Jun 14, 2018 11:31 (IST)
Scenario I:
If the Madras High Court cancels the disqualification of the 18 lawmakers, the Tamil Nadu government could collapse as it would not have the requisite numbers to retain the government. The ruling AIADMK has 116 legislators in the 234-member assembly (excluding the speaker), which is one short of the majority mark.
Scenario II:
If the Madras High Court upholds the disqualification of the lawmakers, then the strength of the assembly would come down to 215 and would not be a threat to the state government. However, by-polls for the 18 seats would then be held, which would be a big test for the AIADMK.
Scenario III: Split Verdict-
The case is being decided by a two-judge bench comprising of Chief Justice Indira Banerjee and Justice M Sundar. If the verdict is split, then the case would be referred to a larger bench, which would not pose an immediate threat to the government.
Scenario IV:
The court could also ask the Speaker to reconsider his decision. If the court decides to give such a verdict, then the speaker, P Dhanapal, could rethink his decision on some rebels, if they express regret. These rebel lawmakers could then lend their support to  E Palaniswami and bring relief to the party.
Jun 14, 2018 11:15 (IST)
The verdict over the 18 rebel AIADMK lawmakers who were disqualified last year ahead of a trust vote, will be given by the Madras High Court today at around 1 pm.
The Madras High Court judgement could have significant repercussions for the current Tamil Nadu government.