On October 5, 2021, the court had issued notice to Twitter on the petition which alleged that Mr Gandhi was "attempting to take political mileage out of the unfortunate incident". 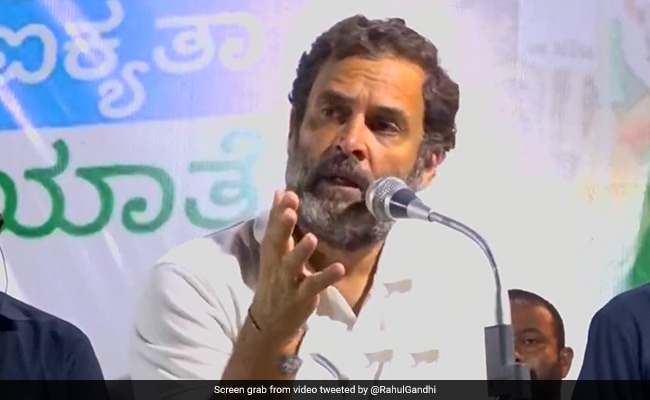 The child rights body contended the offence stands even if the Tweet is blocked.

The National Commission for Protection of Child Rights (NCPCR) told the Delhi High Court on Friday that in spite of Twitter's claim about taking down Congress leader Rahul Gandhi's alleged tweet revealing the identity of a minor Dalit girl, raped and murdered last year, the offence of making such disclosure survives.

A bench of Chief Justice Satish Chandra Sharma and Justice Subramonium Prasad was hearing a petition seeking registration of an FIR against Mr Gandhi for allegedly revealing the identity of the minor victim by publishing a photograph with her parents on Twitter.

Makarand Suresh Mhadlekar, a social activist, had moved the High Court last year claiming that by posting the photograph with the parents of the child victim, Mr Gandhi violated the Juvenile Justice (Care and Protection of Children) Act, 2015 and Protection of Children from Sexual Offences Act, 2012, which prohibit the disclosure of identity of minor victims of sexual offences.

Senior advocate Sajan Poovayya, representing Twitter, submitted on Friday before the court that "nothing survived" in the petition as the tweet in question has been "geo-blocked" and is presently not available in India.

He also informed that initially Mr Gandhi's entire account was suspended by the social media platform, but it was later restored.

Counsel appearing for the NCPCR as well as the petitioner, however, contended the offence still subsists.

The counsel for the NCPCR urged the court to issue a notice to the child rights body on the petition to enable it to file an affidavit.

"We believe the offence survives. If my lords issue notice to me, I will file an affidavit. I will join hands with the petitioner," the lawyer for the NCPCR said.

While the counsel for the petitioner emphasised the tweet was still available outside the country, Mr Poovayya told the court Twitter was a world-wide platform which has blocked access to the content for the Indian territory.  The court refused to issue notice to the child rights body at this stage and deferred the hearing on the plea till December 7 considering that the petitioner engaged a new lawyer to represent him in court.

A 9-year-old Dalit girl had died under suspicious circumstances on August 1 last year, with her parents alleging she was raped, murdered, and cremated by a crematorium's priest in southwest Delhi's Old Nangal village.

On October 5, 2021, a bench headed by then Chief Justice DN Patel had issued notice to Twitter on the petition which alleged that Mr Gandhi was "attempting to take political mileage out of the unfortunate incident".

The court had then refused to issue notice to Mr Gandhi and the Delhi Police on the Public Interest Litigation (PIL) at that stage.

The plea has also sought initiation of appropriate legal action against Rahul Gandhi by the National Commission for Protection of Child Rights.