Former Chief Minister Rabri Devi, who is leader of the opposition in the Upper House, also demanded Nitish Kumar's resignation saying "he is quick to demand high standards of probity from others. He should live up to these himself". 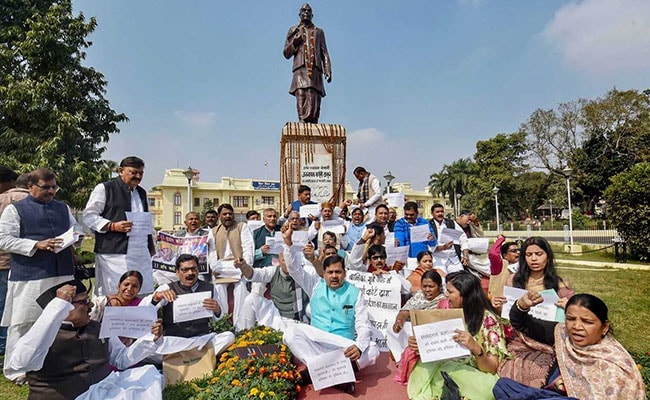 The Bihar Assembly plunged into turmoil on Monday, forcing adjournment till 2 pm within minutes of commencement of proceedings, as the opposition MLAs kicked up a ruckus demanding the resignation of Chief Minister Nitish Kumar over the Muzaffarpur shelter home sex scandal.

No sooner than the House assembled at 11 am, RJD MLAs led by Bhai Virendra and Lalit Yadav were on their feet demanding that the chief minister, who was not present in the Assembly, tender his resignation in the wake of an order passed by special POCSO court at Muzaffarpur last week.

The court had forwarded to CBI an application filed by one of the accused in the scandal seeking investigation into the role of Mr Kumar and a number of top bureaucrats in the release of funds to the shelter home from 2013 to 2018.

It was during this period that sexual abuse of inmates was flagged in a report of social audit conducted by Mumbai-based Tata Institute of Social Sciences.

Speaker Vijay Kumar Chaudhary told the agitated opposition members that as per his understanding, no questions have been raised by the court order on the Mr Kumar's role and the application was forwarded to the CBI as part of a "routine process".

When the RJD MLAs, who were joined by those belonging to other parties like Congress and CPI(ML), persisted with their demand, the Speaker asked if they were in possession of a copy of the order and if so they may produce the same before him.

The opposition members got more agitated over this and trooped into the well, following which the Speaker adjourned the House till 2 pm.

Meanwhile, an adjournment motion on the issue was also moved before the House by CPI(ML) members Satyadeo Ram, Sudama Rai and Mehboob Alam wherein a demand for the CMs resignation was made alleging that until now, "only small fry' were being targeted in the investigation into the scandal.

Speaking to reporters outside the legislative council, former Chief Minister Rabri Devi, who is leader of the opposition in the Upper House, also demanded Mr Kumar's resignation saying "he is quick to demand high standards of probity from others. He should live up to these himself".

Rabri Devi's comment was in the backdrop of Mr Kumar's exit from the "Mahagathbandhan" (Grand Alliance) in 2017, leading to the RJD losing power in the state, following allegations of corruption against her son Tejashwi Yadav, who was then Bihar's Deputy CM.

Rabri Devis demand was seconded by Congress MLC Prem Chandra Mishra, who alleged that under the circumstances, a free and fair probe would not be possible until Mr Kumar resigns from the chief ministers post.