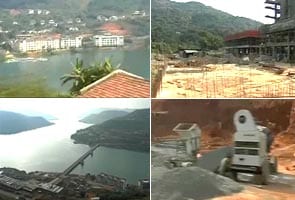 Pune: The Environment Ministry's latest report on the controversial Lavasa township in Maharashtra says the "status quo must be maintained at the site till a final order is given by the Bombay High Court."

The ministry filed its reply on the Lavasa housing project before the Bombay High Court today. It has said that the construction at the site is unauthorised and it violated environment laws.

What the report says:


Sources have told NDTV that Lavasa is likely to move the Bombay High Court against the order.