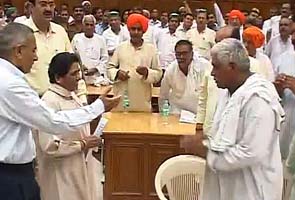 Lucknow: Uttar Pradesh Chief Minister Mayawati has finally met farmers protesting for greater compensation for land and announced a new land acquisition policy which will come into effect from today.

She though clarified that the new policy will not affect land acquisition in Bhatta-Parsaul.

The chief minister said the private players will have to directly acquire the land and the government will only act as a facilitator.

She further added that farmers will be given 16 per cent of developed land.

Last month, farmers' agitation at Bhatta Parsaul in Greater Noida had turned ugly with four persons, including two farmers and as many cops losing their lives.

Earlier, BSP supremo charged Congress party over fuelling the agitation in Uttar Pradesh when she said, "The Congress was only responsible for the demonstrations by the peasantry."

The Allahabad High Court on May 30 cancelled the 170 hectare land acquisition in Gulistanpur in Greater Noida. Earlier 100 farmers approached the court seeking justice as the government "forcefully" grabbed the farm lands.

The Mayawati government reportedly acquired the land for private real estate developers. The High Court also asked the state government to pay for any monetary loss to any farmer.

However, the Supreme Court on the same day refused to entertain a petition seeking a CBI enquiry into the alleged excesses and violence unleashed by the Uttar Pradesh government on farmers protesting against "forcible" acquisition of land at Bhatta Parsaul.

Promoted
Listen to the latest songs, only on JioSaavn.com
Assembly elections are due in Uttar Pradesh in 2012.