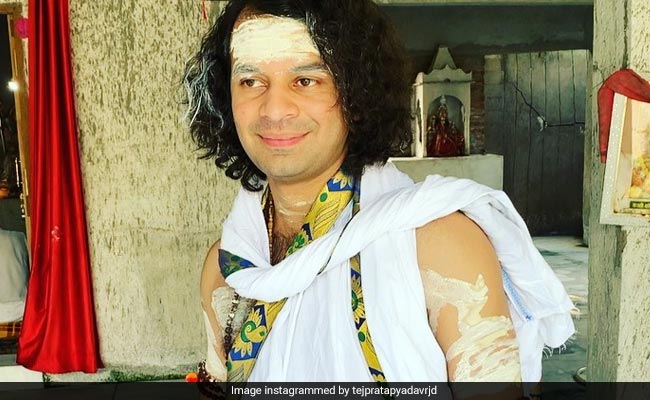 Tej Pratap's car was stopped at a barrier by police personnel. File

RJD leader Tej Pratap Yadav was barred today from performing a 'parikrama' of Giriraj Maharaj temple here in his car by the authorities.

Mr Yadav, a former Bihar cabinet minister, had reportedly come to Mathura on Tuesday to pray for the good health of his father -- Lalu Prasad Yadav, but was forced to return after being denied the permission for his peculiar request.

The officials cited a heavy rush due to 'Mudiya Purnima' for their reason to reject Mr Yadav's request to enter the premises in his car and perform the 'parikrama.' According to police sources, Tej Pratap Yadav, who is known to frequently visit Mathura and Vrindavan, had come here yesterday.

His car was stopped at a barrier and police personnel posted there informed Mr Yadav that entry of vehicles is strictly prohibited, they said.

Tej Pratap allegedly got enraged at this and posted a video on social media saying that he is being stopped by the Uttar Pradesh Police.

He later went to a nearby police station to seek a formal permission to enter with his car, which too was declined by the Station House Officer.

Circle Officer, Govardhan, Gaurav Triptahi said, "Entry of all vehicles in the area is banned because of the large number of people who have come for the Mudiya Purnima." "We are only permitting entry of emergency vehicle. Anyone who wishes to offer prayer is allowed to go on foot for the circumambulation (parikrama) or to visit the temple. But taking a vehicle inside is not permitted," Mr Tripathi said.

Performing 'parikrama' of the main centre of the temple, a standard ritual here, is considered auspicious by the devotees of Lord Krishna.