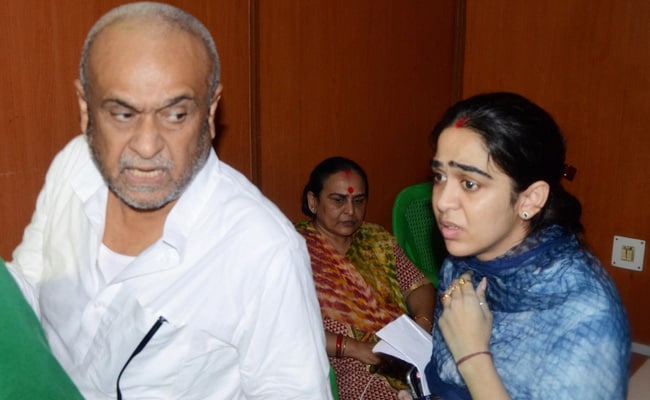 Aishwarya Roy said she had been living with her in-laws despite her husband's divorce suit.

Bihar politician Lalu Yadav's daughter-in-law Aishwarya Roy, who had accused her in-laws of throwing her out on Sunday after months of "ill-treatment", was allowed back inside the former Chief Minister's home in Patna after the police intervened in late night drama.

She accused her mother-in-law Rabri Devi, also a former Chief Minister, of throwing her out of the house and blamed her sister-in-law Misa Bharti for the breakdown of her marriage.

Misa Bharti, a Rajya Sabha member of Lalu Yadav's Rashtriya Janata Dal (RJD), denied the allegations last night. "I'm unnecessarily being dragged into the entire controversy as I hardly live there. But it's normal in every husband-wife dispute that the sister-in-law is dragged into it. You can see in the last few months I hardly went to Patna three-four times and that too to attend court case, so the allegations against me are far from the truth," she told reporters.

Earlier in the day, Aishwarya Roy said she had been living with her in-laws despite her husband's divorce suit hoping for reconciliation. Speaking to the media for the first time since her wedding in May last year, she said Misa Bharati was also trying to drive a wedge between her brothers Tejashwi and Tej Pratap to keep an upper hand.

She said her father-in-law Lalu Yadav, who has been in jail for corruption since December 2017, could have sorted out the dispute had he been around.

The drama unfolded on Sunday afternoon when Ms Roy's father Chandrika Roy, an RJD leader close to Lalu Yadav, rushed to the 10, Circular Road home of the Yadavs despite the heavy downpour that has flooded Patna.

Ms Roy was in the shed where Lalu Yadav held his public meetings. Till late in the evening, the doors of the main building remained barred. Finally, the police came and asked the Yadavs to let her back in.

She claimed over the last three months, she had not been given meals on the instructions of her sister-in-law Misa Bharti and had survived on food sent by her parents. Matters came to a head on Sunday afternoon when she was not allowed to enter the kitchen. An altercation with a household help ended with him chasing her out of the house, she alleged, and that is when she called her parents and a women's helpline.

"Misa regularly misbehaved with me, harassed and tortured me. Last night (Saturday) she again tortured me and threw me out of the house in the presence of Rabri Devi," she was quoted as saying by news agency IANS.

Tej Pratap had reportedly walked out of the house earlier this year, upset at his family for letting his estranged wife stay.