Lack of schools force Assam kids to drop out 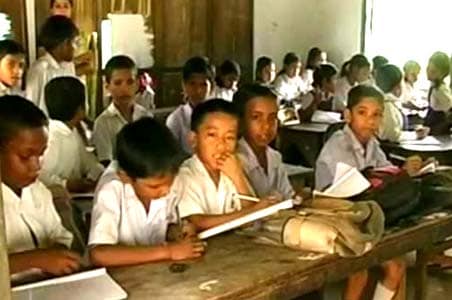 Despite a decreasing trend, the number of children who drop out of schools in Assam is alarming. 70,000 children have dropped out in the first quarter of 2009.

The reason, there are simply not enough upper primary schools in the state.

Some of the students of a lower primary school may have to discontinue with their studies after class 5.

That's because Assam has a peculiar problem of a mismatched ratio between lower and upper primary schools.

There are 30,000 lower primary schools in Assam and not even half of that in the upper primary section.

Avinash Joshi, state project director of Sarva Siksha Abhiyan, said, "For every two lower primary schools you must have one upper primary school in Assam. So, there is a gap of around 3,000 schools.

That's why when you talk of drop out, it's more prevalent in upper primary sections and one of the reasons for drop out of school children is non-availability of sufficient number of  upper primary schools within a reasonable distance."

If that's not all, Assam has one of the highest rate of teachers staying away from classes. A mere 25 per cent teacher attendance is registered in schools here.

To add to that the state has 6500 single teacher schools . Lack of toilets in most schools also result in dropout.

Lack of schools, infrastructure, shortage of teachers, non-availability of trained people and socio-economic conditions are obvious reasons for high drop out of school children here.
Added to that is Assam's own woes of having several thousand children in the refugee camps of the trouble-torn areas of the state.