Amethi mob killing: A video taken by an eyewitness shows a severely injured man covered in dust writhing on the ground, while a group of people surround him and shout at him

Amethi mob killing: A man was beaten to death over child kidnapping rumours in Uttar Pradesh

A video shot by an eyewitness shows a severely injured man covered in dust writhing on the ground, while a group of people surround him and shout at him. Another video shows four policemen carrying a man away by his hands and legs from a paddy field.

The labourers from Pratapgarh had finished their work and stopped at a liquor store for some drinks, said Amethi senior police officer Khyati Garg. They got into an argument with another person, who was drunk, outside the liquor store, the officer said.

"The labourers beat him up. They were trying to shove him into their vehicle when a villager saw them from a distance and assumed they were kidnapping a child," said Mr Garg. 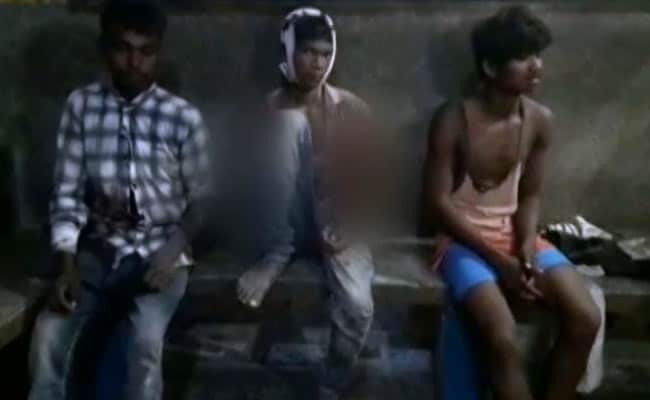 Amethi mob attack: The injured labourers after they were attacked over child kidnapping rumours

At least 50 people have been arrested across Uttar Pradesh in the last one month for spreading rumours of child kidnappers on the prowl. Not a single rumour has been proven to be true, the police said.

The police said they have been meeting village heads and making public announcements to guard against the rumours that could escalate into mob killings.

At least 12 cases of mob assault on people accused of kidnapping have been reported from Bulandshahr district in the last one month, the police said. In Ghaziabad last week, a video of the woman being thrashed by the mob was circulated on social media. She was taking her grandson for shopping when she was mistaken as a child kidnapper.

Rumours of child kidnappers that are shared on social media, especially WhatsApp, have from time to time led to assaults on innocent people. These incidents have been reported from across the country.

In July last year, a 32-year-old software engineer was beaten to death and three others - one of them a Qatar national - were seriously injured over WhatsApp-driven rumours of child kidnapping in Karnataka's Bidar. The police said the mob frenzy started after the man from Qatar was seen distributing chocolates to local children. Rumours of child kidnapping were doing the rounds in the area and seeing the chocolates being handed out, residents of a nearby village sent messages on a WhatsApp group, leading to the deadly assault.