Pinarayi Vijayan had already informed that he would take the shot soon since the second phase of the vaccination drive began across the country on Monday. 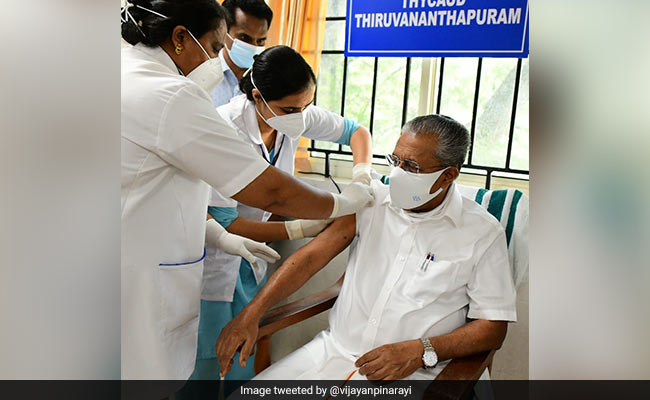 I encourage everyone to get vaccinated as and when it is available: Pinarayi Vijayan

Kerala Chief Minister Pinarayi Vijayan on Wednesday received the first dose of the COVID-19 vaccine, joining the bandwagon of his counterparts in Odisha and Bihar in getting the shot.

The 75-year-old had already informed that he would take the shot soon since the second phase of the vaccination drive began across the country on Monday.

Health Minister K K Shailaja and officials accompanied him at the vaccination centre in the Government Women and Children's Hospital at Thycaud.

Later, he urged people to take part in the drive without any hesitation and criticised those involved in spreading rumours and misinformation against taking the shot.

"Receiving the COVID-19 vaccine was a good experience and there was no need to worry at all about it," he told reporters after taking the shot along with his wife Kamala.

Noting that a large number of people were coming forward to take the vaccine, Mr Vijayan said vaccination has equipped the mankind to prevent deadly diseases that had plagued the world at various stages.

But, still there were some people campaigning against the drive.

"However, people have not accepted it. I am saying this to prevent people from falling prey to such propaganda," the Chief Minister added.

Later, in a tweet, Mr Vijayan said, "Took the first dose of COVID vaccine today. Vaccines provide immunity to diseases. I encourage everyone to get vaccinated as and when it is available. Together, let us overcome this pandemic through scientific methods."

Besides Health Minister K K Shailaja, Revenue minister E Chandrasekharan and Ports and Museums Minister Kadannappally Ramachandran received the first dose of the vaccine from hospitals and Kannur on Tuesday.

Over 1,000 centres have been set up in various districts across the state for people to take the jab.

The second phase drive targets anyone above 60 years of age and those over 45 years with comorbidities.

They can receive vaccine shots for free at government hospitals and for a charge at a number of private hospitals, as per the Centre's directive.

To get vaccinated, everyone should register at the prescribed portal beforehand and the shot should be taken on a priority basis, health department sources added.