Rajiv Pratap Rudy had called Shatrughan Sinha very clever and opportunistic referring to his presence by the party's side whenever a whip was issued in the Parliament, in order to avoid disqualification. 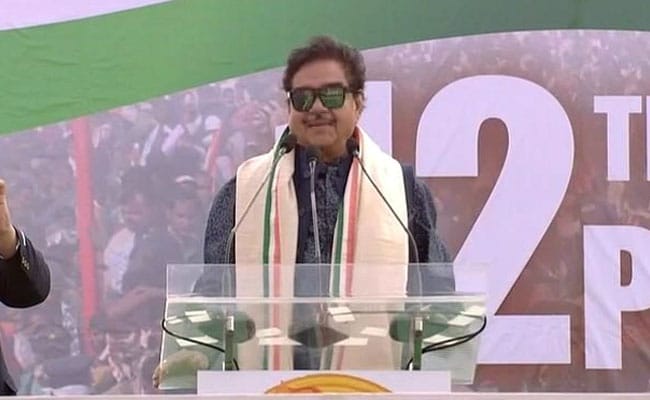 Disgruntled BJP leader Shatrughan Sinha on Monday took a veiled dig at party spokesman Rajiv Pratap Rudy, saying he could only feel sympathy for the former union minister who has been under lot of pressure because of being sidelined.

Mr Sinha, who refrained from mentioning Mr Rudy by name, was criticized by the Saran MP on Saturday when he appeared at the opposition rally in Kolkata and tore into the leadership of Prime Minister Narendra Modi and Amit Shah with the remark if speaking the truth is an act of rebellion, then count me as a rebel.

I was not surprised by the statement about me by a young spokesperson of the party who has been an old friend. Some people are saying that my young friend has been under lot of pressure because of being sidelined and that we should only feel sympathy for the young man, who seems to have been forced to make statements like these, or probably strives to keep himself relevant, the actor-turned-politician and Patna Sahib MP tweeted.

Mr Rudy had called Mr Sinha very clever and opportunistic referring to his presence by the party's side whenever a whip was issued in the Parliament, in order to avoid disqualification, and added that he was sure the BJP would take cognizance of his presence at the Kolkata rally and take a call.

Mr Rudy, a close aide of veteran socialist leader and former Prime Minister Chandra Shekhar, had joined the BJP in the 1990s and after winning the now abolished Chhapra Lok Sabha seat in 1999 made a minister in the government headed by Atal Bihari Vajpayee.

In 2014, when he won from Saran defeating RJD supremo Lalu Prasad's wife and former Chief Minister Rabri Devi, he again became a Union minister but resigned in 2017 amid speculations that he might have been asked to put in his papers since Prime Minister Narendra Modi was reportedly dissatisfied with his performance.

His recent appointment as a national spokesperson of the BJP is being viewed as a signal that he may not be considered for a ticket in the upcoming Lok Sabha polls. Mr Sinha said in another tweet "as a genuine well wisher, I have only one advice..do not wilt under pressure and keep your backbone straight. And yes, no need to get personal even with adversaries, what to talk of friends. Wishing you all the best and a successful political career ahead."