Kedarnath will be restored to its original glory by the government 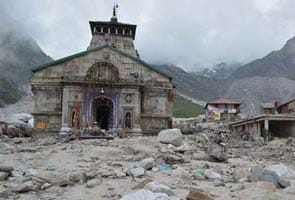 New Delhi: The Kedarnath Temple in Uttarakhand was "partially destroyed" and suffered serious damages in the recent floods but government will make all required efforts to restore it to its "original glory", Minister of Culture Chandresh Kumari Katoch said today.

A team of Archaeological Survey of India (ASI) officials and experts was sent to Uttarakhand to visit the temple and assess the damage.
However, the chopper carrying the team could not land due to bad weather, she told reporters in Delhi.

"After the natural calamity in Uttarakhand, the Kedarnath Temple was partially destroyed. We had sent a team to assess the damage and how we could restore it... Unfortunately, due to bad weather they could not reach the site," Ms Katoch said.

The minister maintained that the team will be sent as soon as the weather clears. Rescue and rehabilitation as well as construction of roads are the priority at the moment, she said.

"The team will have to assess the damages and what would be the expenditure to restore it. We want to start work as soon as we get the clearance from the state government," she said.

She maintained that the temple has suffered a "lot of damage".

Ms Katoch said provision has been made for funds for ASI to begin the work. Uttarakhand government will also contribute and the ministry will encourage public participation in the process.

The minister, however, ruled out any role for any other state government in restoration work.

Promoted
Listen to the latest songs, only on JioSaavn.com
She said ASI is involved in restoration of heritage buildings in other countries and this work should be left for them to handle.