Karunanidhi to take up killing of fishermen with PM 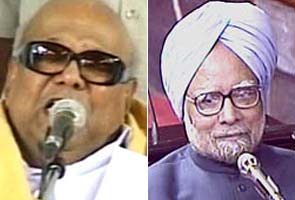 New Delhi: With two Indian fishermen being allegedly killed by Sri Lankan Navy in the past 15 days, Tamil Nadu Chief Minister M Karunanidhi will raise the issue with Prime Minister Manmohan Singh tomorrow and ask him to tell Colombo not to resort to firing.

Karunanidhi, who arrived here today on a three-day visit, said he has been raising the issue with Singh now and then and will broach the topic again tomorrow.

"I have been discussing the fishermen issue with Singh on several occasions. I will raise the issue tomorrow also," he told reporters at the Tamil Nadu House here.

"He will ask the Prime Minister to tell Colombo to desist from firing at the fishermen. He will also tell Singh that India should convey its strong protest," the sources said.

The meeting will take place at a time when Foreign Secretary Nirupama Rao is in Colombo to take up the issue of Indian fishermen who have been killed allegedly by the Sri Lankan navy.

She is expected to meet Foreign Minister G L Peiris and other senior Foreign Ministry officials and lodge India's strong protest over the issue.

Rao was asked by External Affairs Minister S M Krishna to travel to Colombo tomorrow to discuss with the Sri Lankan government the killing of Indian fishermen.

Reflecting the political sensitivities in Tamil Nadu, India has already reacted very strongly to the incidents in which two Indian fishermen were killed in the span of one month, notwithstanding Sri Lankan government's claim that its navy was not involved.
Comments
Karunanidhi to meet PMKarunanidhi and PMfishermen killing