Pak Agrees To Visa-Free Access To Kartarpur, No "Anti-India Activities"

India flagged its security concerns during a meeting that took place between delegations of the two countries on the Pakistani side of the Attari-Wagah border to discuss the modalities of the Kartarpur corridor. 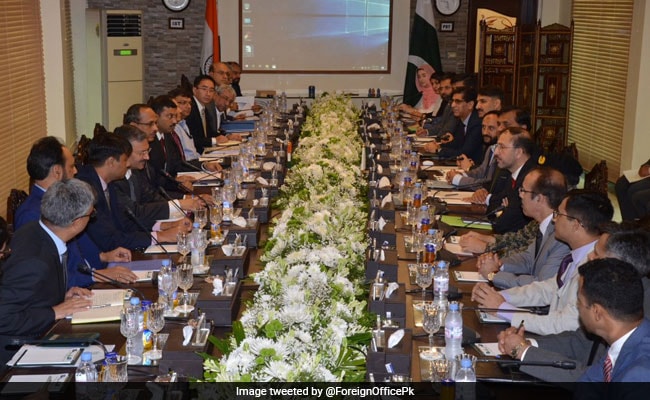 India on Sunday handed over a dossier to Pakistan about individuals and organisations based in the neighbouring country which might try to disrupt pilgrimage to the Kartarpur Sahib Gurdwara, following which Islamabad assured that no anti-India activity would be allowed.

The government Sunday said that Pakistan has "in-principle agreed" to build a bridge to connect with the Indian side and to allow visa-free travel for Indian passport holders and OCI card-holders.

India flagged its security concerns during a meeting that took place between delegations of the two countries on the Pakistani side of the Attari-Wagah border to discuss the modalities of the Kartarpur corridor.

New Delhi had earlier conveyed its strong concerns to Pakistan over the presence of a leading Khalistani separatist in a committee appointed by Islamabad on the project.

"We have shared our concerns regarding individuals or organisations based in Pakistan who may try to disrupt the pilgrimage and misuse the opportunity," he told a press conference at the Attari border on the Indian side.

"To highlight the concerns, we handed over a dossier today containing information about these organisations and individuals which may pose a kind of potential threat to our pilgrims. We have handed this over with a request that they seriously act upon it," Mr Das said.

The Pakistan side assured the delegation that no anti-India activity would be allowed, the joint secretary, who headed the Indian delegation, said.

On Gopal Chawla, Mr Das said, "We had sought confirmation that individuals like Chawla were removed from the bodies to which we had raised objection. So they confirmed in that Chawla had been removed from PSGPC and other bodies."

He said the Pakistani side was apprised of the ban imposed by Government of India on US-based pro-Khalistan outfit ''Sikhs for Justice''.

The Indian delegation also sought consular presence in the gurdwara to be able to provide assistance to pilgrims, if required.

India urged Pakistan to take into consideration the sentiments of pilgrims to have smooth, easy and unrestricted access to the gurdwara throughout the year, Mr Das said.

A statement by the Home Ministry said Pakistan was requested to reconsider charging any fee or introducing any permit system for pilgrims.

The Indian delegation comprised representatives from the Home Ministry, External Affairs Ministry, Defence Ministry, the Punjab government and the NHAI.

A statement of the External Affairs Ministry said progress was made in finalising the draft agreement with regard to the modalities.

Mr Das said the delegation raised the issue of encroachment and acquisition of land belonging to the gurudwara.

"We have requested Pakistan to honour religious sentiments and remove the encroachment, besides restoring the land to the gurudwara," he said.

The statement said Pakistan has agreed to look into the issue.

The work on the four-lane highway to the crossing point at the IB is progressing well and is on schedule, officials said.

It will be completed by end September. India is also constructing a state-of-the-art construction passenger terminal facility that can accommodate 15,000 passengers, they said.

The bone of contention is connecting the two sides at the zero point which was also discussed.

India is constructing a bridge at the zero point and has urged Pakistan to build a similar bridge on its side that will provide safe and secure movement of pilgrims and address concerns regarding flooding.

Another option proposed by Pakistan is building a causeway which is also not acceptable to India as it has been insisting on an all-weather bridge. The bridge is over a creek of which the majority part falls in Pakistan.

The Indian delegation shared detailed flood analysis to Pakistan to highlight these concerns.

The Indian delegation said an earth filled embankment or a causeway proposed by Pakistan will create problems for its people and this should not be built even in the interim.

"Pakistan side agreed, in principle, to build a bridge at the earliest," it said.

"Pending the construction of a bridge over the old Ravi creek by Pakistan on their territory, India offered to make interim arrangements for making the corridor operational in November, given the historic importance of the 550th birth anniversary of Guru Nanak Dev," it added.

Mr Das expressed confidence that India would be ready to commence the pilgrimage on the auspicious occasion.