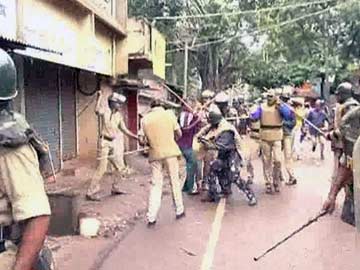 Police using batons on villagers in Yellur, Belgaum, in clashes over a board that claimed the region belongs to Maharashtra

Belgaum: The border town of Belgaum in Karnataka is tense after a board put up by villagers revived a decades-old dispute with neighbouring Maharashtra.

On Sunday, police in riot gear were seen in visuals chasing villagers at Yellur, using batons on them and even tearing down gates outside houses.

The villagers had allegedly attacked them with sticks and stones and tried to drive them away after repeatedly putting up a board that said the region belongs to Maharashtra.

The board was removed on Friday on a high court order.

But on Saturday, villagers defied the order, reinstalled the board, blocked roads and drove away the media.

When the police removed it again, the villagers hit back. Six people were arrested and large gatherings have been banned since clashes broke out on Saturday.

Ahead of the Maharashtra election, due by October, the row has been seized by the Shiv Sena, a close ally of India's ruling BJP.

In its mouthpiece Saamna, the Sena accused the Karnataka police of removing a board that symbolized "Belgaum's Marathi pride".

Sena spokesperson Sanjay Raut said, "Our government is at the Centre. We demand that the Belgaum region is placed under central rule."

"There is no atrocity either on Marathas or anybody else. We are giving protection to all people of Karnataka," he said, responding to the Sena's allegations.