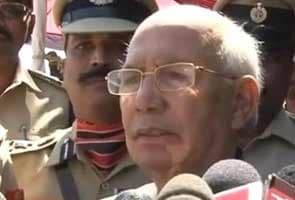 Bangalore: Karnataka Governor HR Bhardwaj has said that the state government is not in danger, for now. Mr Bhardwaj said today that he "won't seek a confidence vote for now." He added, "The day on which the government comes into minority, I will issue notice. Now the government is still in majority." The governor had accepted the resignations of two ministers yesterday.

Chief Minister Jagadish Shettar said, "I have explained to the governor when he asked me about the 13 MLAs resigning that we still have absolute majority in the house."

Minister for Public Works CM Udasi and Minister for Energy Shobha Karandlaje, who quit the Jagadish Shettar government, are expected to join the new party founded by BS Yeddyurappa, who exited the Bharatiya Janata Party (BJP) in December after 40 years.

There are 11 other state legislators from the BJP who say they want to quit the government. They were set to resign earlier this week, but the Speaker of the Assembly, KG Bopaiah, is not in town. Therefore, they submitted their resignations in writing to the governor.

Asked if he would direct the speaker to accept the resignations, Mr Bhardwaj said that the speaker's was "an independent and very high office" and he cannot dictate terms.

If 18 legislators in total resign, the government will be in a minority.

But the BJP denies that its government is in trouble. "I have talked to Chief Minister (Jagadish Shettar) today. I am confident, there is no threat to our government in Karnataka. There is no crisis there," BJP President Rajnath Singh had said on Friday.

Earlier, the governor had indicated that he may ask the chief minister to prove his majority.

"I have dictated my orders that this is a split in the political party of the BJP. So you study the relative strength of the party in the assembly. But assembly records were not with me. Therefore, I summoned the records. So I will see what is the strength, (sic)" the governor said on Friday.

Mr Yeddyurappa has been threatening to bring down the BJP's first government in south India since last year, when he accused his party of reneging on a promise to give him a powerful position. He was forced to resign as chief minister after he was indicted for corruption in a report on illegal mining. The party tried to assuage him by allowing him to pick his replacement, not once but twice. In both cases, Mr Yeddyurappa turned against his successors. He has vowed to defeat the BJP in the state elections this year with his Karnataka Janata Party (KJP).