"Enjoy Your Weekend" And More - From Siddaramaiah, A Day After Karnataka Exit Polls

Karnataka Chief Minister Siddaramaiahm, in a tweet, called the exit polls "entertainment for the next 2 days". 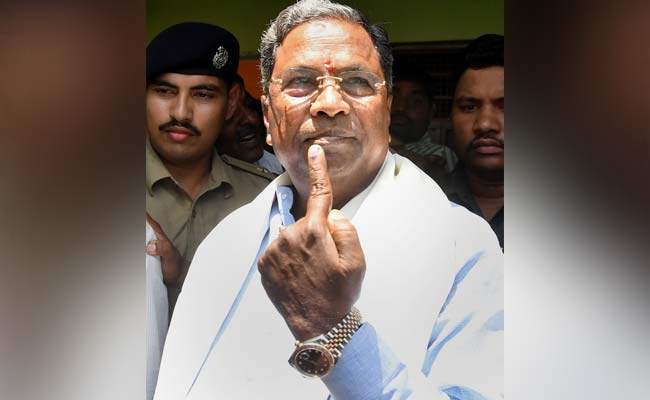 Bengaluru: "Don't worry about exit polls" was Chief Minister Siddaramaiah's message to Congress workers and supporters, the morning after forecasters indicated a hung house in Karnataka with the BJP as the single largest party, followed by the Congress. Calling the exit polls "entertainment for the next 2 days", the Chief Minister's Sunday tweets encouraged party workers to "enjoy the weekend", with an emphatic "we are coming back".

An aggregate of nine exit polls shows the BJP will get 97 seats while the Congress will get 90 - considerably below the 112 needed for majority for the 222 seats on which elections were held on Saturday. It gives 31 seats to former prime minister HD Deve Gowda's Janata Dal D(Secular) or JD(S). Votes will be counted on Tuesday.

Exit opinion polls are entertainment for the next 2 days

On Saturday, Chief Minister Siddaramaiah told NDTV that he was "very confident" of the Congress retaining power, adding that it will have "have majority" in the state where no party had been allowed two consecutive terms in power for more than three decades.

Asked if he would seek help from Mr Gowda in case of a hung assembly, he told NDTV, "The situation does not arise."

The support of the JD(S), according to exit polls, would be crucial for government formation, putting it in the kingmaker's spot. While five exit polls predict that the BJP will be the single largest party, four have given the spot to the Congress.

Mr Siddaramaiah, who joined the Congress after getting expelled from the JD(S) in 2005 over differences of opinion with Mr Gowda, has repeatedly criticised his former boss during the campaign. His party has accused Mr Gowda's party of tacitly colluding with the BJP in Chamundeshwari, where the Chief Minister contested from; he has won five times and lost twice. Expecting a tough fight there, Mr Siddaramaiah had reportedly asked the Congress for a safe seat as a backup. Badami in north Karnataka, the second seat where he contested from this time, is said to be "Plan B".
Comments
SiddaramaiahKarnataka Chief MinisterKarnataka election 2018