Karnataka Congress Disappointed By No Bharat Ratna For Seer

The Lingayat spiritual leader, often known as the "walking god" and revered by millions, died on Monday at the age of 111 after an illness. 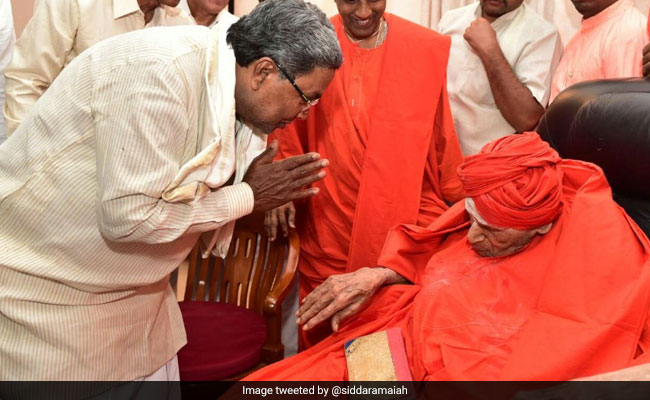 The Congress in Karnataka has expressed disappointment over the omission of late Dr Shivakumara Swami, the seer who headed the Sree Siddaganga Mutt in Karnataka's Tumakuru, from the list of those awarded Bharat Ratna on Friday evening.

The Lingayat spiritual leader, often known as the "walking god" and revered by millions, died on Monday at the age of 111 after an illness. Before his death, political leaders from both ends of the political spectrum had said he should receive the Bharat Ratna. Chief Minister HD Kumaraswamy of the Janata Dal Secular had said this at Tumakuru, where the Sree Siddaganga Mutt is located, and that view was echoed by BJP state party chief and former chief minister, BS Yeddyurappa. The demand was made again after the seer's death.

When the list of three awardees of the country's highest civilian award was announced and did not include Dr Shivakumara Swami, the Congress in Karnataka said in a series of tweets, "It is really unfortunate that Dr. Shri. Shivakumara Swamiji was not honoured with Bharat Ratna inspite of repeated recommendations by Shri. @siddaramaiah during his tenure & now by the coalition government... Even though @BJP4Karnataka leaders supported our voice, Central Government has completely ignored the selfless contribution of Swamiji towards creating a harmonious society. We strongly urge Central Government to reconsider."

Karnataka Congress Chief, Dinesh Gundu Rao tweeted: "While we are proud that senior Congressman Dr Pranab Mukherjee is conferred the Bharat Ratna, we are extremely disappointed that @PMOIndia @narendramodi has ignored our very own walking God Sri Shivakumara Swamigalu who rightly deserved the award."

Chief Minister Kumaraswamy too agreed with the Congress views. He tweeted, "Congratulations to all #BharatRatna and #PadmaAwards winners. We are proud of the five Padma awardees from Karnataka. I am glad that a few achievers were awarded at least posthumously. Yet, it's disappointing that Siddaganga Seer late Sri #ShivakumaraSwamiji was not conferred BharatRatna."

His party's Danish Ali though criticised the selection of former President Pranab Mukherjee for the award, and said the Tumakuru seer should have been awarded the Bharat Ratna.

"Pranab Mukherjee is being awarded the Bharat Ratna because he visited the RSS headquarters and described the founding Sarsanghchalak Hedgewar, as 'the son of the soil'. there were more deserving candidates like Biju Patnaik and Kanshi," he tweeted.

Shivakumara Swami was one of the most respected religious and social practitioners of the Lingayat-Veerashaiva faith of Lingayatism.

As the founder of the Sri Siddaganga Education Society, he helped thousands access education. He also had an honorary doctorate in literature. The seer was a philanthropist and touched the lives of many, from different religions and castes.