BS Yediyurappa Takes A Ride On Bengaluru Suburban Railway. What He Said 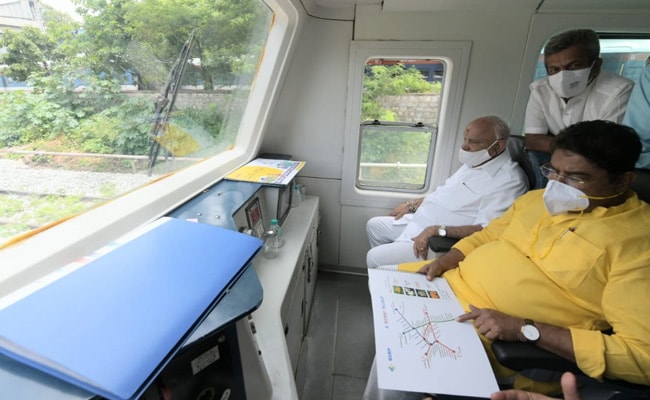 As Bengaluru opens up after COVID-19 lockdown restrictions, the city is reminded of one of its major challenges: mobility. For years, activists have pushed for a good suburban rail network which would help in cutting down the number of vehicles on the road and also reduce commute time for those using the railways.

The long- pending Rs 15,767 crore Bengaluru suburban railway project is aimed at doing just that. The project is being executed by K-RIDE, a joint venture of the Karnataka government and the Ministry of Railways.

Karnataka Chief Minister BS Yediyurappa inspected the progress of the project on Thursday, travelling from the Bengaluru cantonment station to Heelalige railway station.

"If the Bengaluru suburban rail project is completed swiftly, traffic congestion in Karnataka's capital will be reduced drastically. People will be able to commute easily in the suburban areas and to the Kempegowda International Airport," Mr Yediyurappa said.

The project will include 4 corridors with a total route length of 148 km. These corridors are: KSR Bangalore City to Devanahalli and Bengaluru International Airport (41.40 km), Baiyyapanahalli to Chikkabanavara (25 km), Kengeri to Whitefield (35.52 km) and Heelalige (Chandapura) to Rajankunte (46.24 km).

The cost of the project will be shared on 20:20:60 basis between the Government of Karnataka, the Ministry of Railways and external funding.

In addition to the project, work on doubling the single rail line between Yeshvantpur- Channasandra and Baiyyappanahalli- Hosur had also been sanctioned in 2018-2019. These projects will also be executed by K-RIDE and the cost of the projects will be shared on 50: 50 basis between the Government of Karnataka and the Ministry of Railways.

The 22 km long Yeshvanthpur- Channasandra railway doubling project has an estimated cost of Rs 315 crore with the state's share being Rs 157 crore. The work on the project started in October 2020 and is estimated to be completed by December 2023.

The 48 km long Baiyappanahalli- Hosur railway doubling project, which began in October 2020 and is expected to be completed by December 2023, is being implemented at an estimated cost of Rs 499 crore. In 2020-21, the state government released Rs 65 crore for this project.