The rebel legislator, K Sudhakar, was allegedly pushed around by party colleagues on the state assembly premises after word of his exit spread. 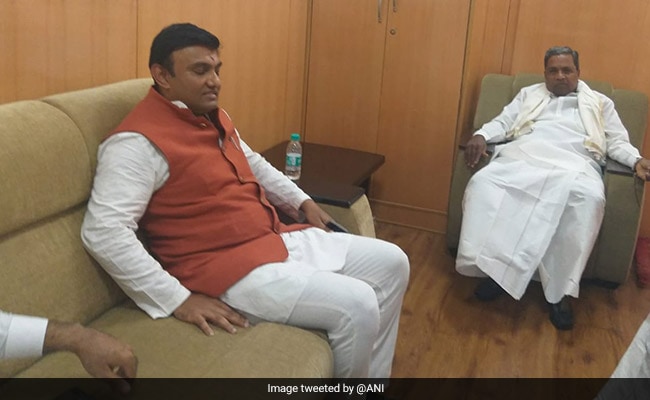 K Sudhakar with Siddaramaiah during negotiations on the state assembly premises.

The BJP today accused Congress leaders of "assaulting and locking up" a rebel legislator after he refused to take back his resignation amid a political crisis that's threatening to bring down the HD Kumaraswamy government in Karnataka.

The rebel legislator, K Sudhakar, was allegedly pushed around by party colleagues on the state assembly premises after word of his exit spread. According to the BJP, a number of angry party leaders surrounded Mr Sudhakar and demanded that he withdraw his resignation. When he refused to budge, they allegedly dragged him to State Minister KG George's office for talks with former Chief Minister Siddaramaiah and other senior leaders.

The episode, which lasted for over an hour, ended with the police escorting Mr Sudhakar to the Raj Bhavan after the intervention of Governor Vajubhai Vala. State Congress president Dinesh Gundu Rao and Minister Priyank Kharge were also seen at the spot.

Speaking to NDTV after his meeting with the governor, the rebel lawmaker claimed that he was pushed around by a councillor who he does not want to name. "Then Siddaramaiah asked me to withdraw my resignation. But I have taken this decision after much thought. Development suffered under the coalition government, and I don't want to be left out of building a new India," he said.

Meanwhile, BJP leader BS Yeddyurappa lashed out at the Congress over the incident -- terming it as a fitting portrayal of the "state-sponsored hooliganism" in Karnataka. Mr Sudhakar is one among the 18 legislators who have decided to quit the ruling coalition, putting it at risk of becoming a minority in the state assembly. However, Speaker Ramesh Kumar rejected eight of the letters on the grounds that they were not written in the right format.

"It's a black day in the history of Karnataka democracy. A ruling party MLA (Sudhakar) has been assaulted by his own president, ministers and colleagues.They tried to put pressure on him. This shows the kind of goondaraj that exists in the state," news agency ANI quoted BJP legislator Basavaraj Bommai as saying.

Mr Bommai also sought the urgent intervention of Karnataka Governor Vajubhai Vala in the ongoing political crisis. "The Governor should step in and pull down the Kumaraswamy government. If Kumaraswamy continues with the Congress, his image will be completely tarnished. So I urge him to resign as Chief Minister in good wisdom," he said.

Siddaramaiah, however, dismissed claims that the rebel legislator was manhandled or locked up. "Sudhakar is not a BJP MLA or BJP worker. Just because he has submitted his resignation, it doesn't mean that he has become a BJP MLA. As long as his resignation is not accepted, he continues to be a member of the Congress. I was only trying to convince him as a Congress legislature Party leader," he said.

Meanwhile, the Karnataka BJP has denied claims of orchestrating the mass resignations in order to destabilise the Congress-Janata Dal Secular coalition government. "These Congress and JDS legislators have resigned on their own accord because they do not want to continue in this manner. So, naturally, we will support them. But we are in no way responsible for what happened," BS Yeddyurappa told NDTV.