"A privilege to be able to give plasma and help others, to help my fellow Indians," New Zealand-origin Karl Rock, says, before donating plasma at a Delhi hospital 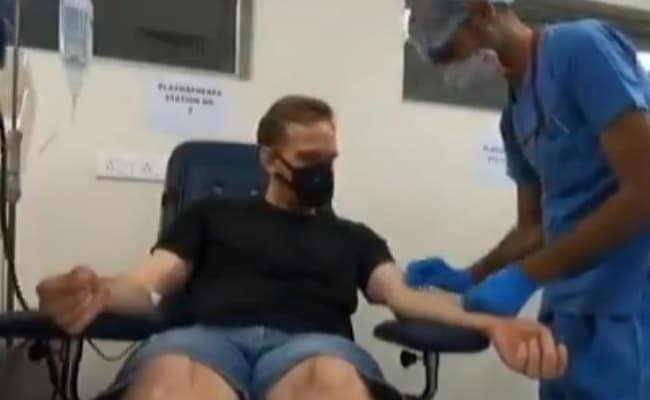 Karl Rock, a video logger from New Zealand who has been living in India for the past three years, has won praise from Delhi Chief Minister Arvind Kejriwal after he donated plasma to help critically ill coronavirus patients in the national capital.

Responding to the video, Mr Kejriwal said: "Karl Rock, a New Zealand-origin Delhiite, donated plasma. You must watch his video about his experience. I am sure this will encourage many more to come forward to donate plasma and help save lives".

Mr Rock replied: "Wah, Arvind Kejriwal called me a Delhiite... such an honour".

The popular YouTuber, who has recovered from the virus, released a short video describing his experience at the "world-class" Institute of Liver and Biliary Sciences in south Delhi. He also urged others who had recovered to donate "to help fellow Indians".

"Namaste friends. Now you know I had corona. And there is one benefit is being able to donate plasma to help really sick people... those in critical condition. So, the second I heard (the) Delhi chief minister had opened a plasma bank, I called it up and registered myself," Karl Rock says in his video.

"It is a privilege to be able to give plasma and help other people, to help my fellow Indians," he adds, reminding viewers, "Plasma therapy is the best treatment for COVID-19 we have right now".

In the nine-minute video, he takes viewers on a brief tour of south Delhi, including Khan Market and past the residences of Prime Minister Narendra Modi and the late Jawaharlal Nehru.

At the ILBS in Delhi's Vasant Kunj, Mr Rock interacts with hospital staff in Hindi. He describes his symptoms as medical staff preps him for plasma donation.

"The needle is in but I can't really feel anything. So, even if you have a fear of needles don't worry. You can't feel anything except a slight prick in the beginning," he reassures viewers.

After the donation, which takes around an hour, Mr Rock and others who have donated are given a sandwich and a packet of coconut water as refreshment and a certificate of thanks signed by Arvind Kejriwal.

"It feels good to help," he says, adding, "You can donate if you test positive and it has been more than two weeks since you recovered".

The national capital, the worst-hit metro city and the third worst-hit region in the country, opened India's first plasma bank this month.

Delhi has nearly 1.10 lakh confirmed COVID-19 cases, of which more than 21,000 are still active. 3,300 deaths have been linked to the infectious virus.

Across India more than 8.2 lakh cases have been detected, with more than 22,000 deaths reported.