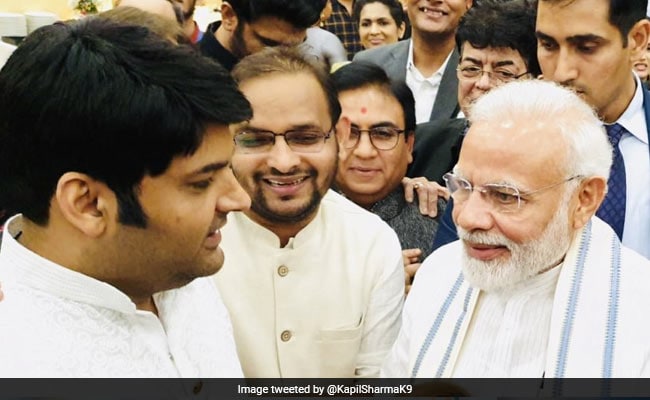 PM Modi met Kapil Sharma and other Bollywood celebrities at an event in Mumbai.

In 2016, comedian Kapil Sharma kicked off a row when he tagged Prime Minister Narendra Modi in angst-ridden tweets complaining about corruption. Since then, the comedian-turned actor has come a long way in his admiration for the prime minister.

Kapil Sharma was among the many Bollywood celebrities to meet PM Modi at the inauguration of the National Museum of Indian Cinema (NMIC) in Mumbai. Soon after the event, Mr Sharma tweeted: "Respected pm Sh @narendramodi ji,it was nice meeting u n great knowing ur inspiring ideas and progressive views about our film industry and our nation. N sir I must say u have a great sense of humor too! (sic)".

The prime minister responded to the tweet saying, "When (Kapil Sharma) appreciates somebody's humour, it sure makes that person happy and I am no exception".

When @KapilSharmaK9 appreciates somebody's humour, it sure makes that person happy and I am no exception. :)

Thank you for the kind words Kapil. https://t.co/SHVTH6vI8p

PM Modi has, in the past, termed humour as the "best healer" adding that "we need more satire and humour" in daily life. "Humour brings happiness in our lives. The power of a smile or the power of laughter is more than the power of abuse or any other weapon," he had said in January 2017 at the 47th anniversary of Tamil magazine Thuglak. "Humour builds bridges instead of breaking them... And this is exactly what we require today. Building bridges, bridges between people, bridges between communities, bridges between societies," the prime minister had said.

Asha Bhosle, Aamir Khan, AR Rahman and Parineeti Chopra were some of the other celebrities present at the event.