Kannauj "Giant-Killer" Subrat Pathak Not In PM's Council Of Ministers

Subrat Pathak's victory from Kannauj defied the perception that farmers in Kannauj, which is largely a potato belt, were critical of the Yogi Adityanath government in Uttar Pradesh. 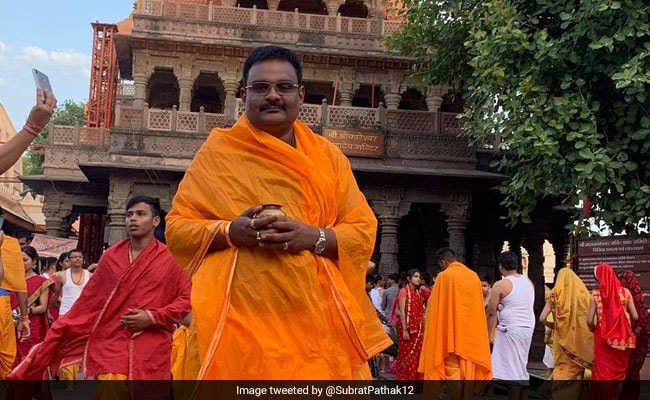 Subrat Pathak had lost the 2014 elections against the Samajwadi Party's Dimple Yadav.

Subrat Pathak, the BJP paliamentarian from Kannauj, was speculated be one of the faces to be inducted into Prime Minister Narendra Modi's new cabinet today however he was left out. He had defeated Dimple Yadav -- the wife of Samajwadi Party chief Akhilesh Yadav -- by 12,353 votes in Kannauj, which voted as part of the fourth phase of the Lok Sabha elections on April 29.

Dimple Yadav had beat Subrat Pathak, who belongs to the Brahmin community, by a similarly narrow margin in the 2014 Lok Sabha elections. "This mandate is against the Samajwadi Party's atrocities, corruption and dynasty politics," he had said shortly after his victory from Kannauj -- a Samajwadi Party stronghold for the last 20 years -- was confirmed.

Subrat Pathak's victory from Kannauj defied the perception that farmers in Kannauj, which is largely a potato belt, were critical of the Yogi Adityanath government in Uttar Pradesh. In the run-up to the elections, Dimple Yadav had even claimed that the "BJP's anti-farmer policies" would propel her to a resounding victory over her rival candidate.

The 39-year-old politician had earlier served as the president of the Bharatiya Janta Yuva Morcha, the youth wing of the BJP. A post-graduate in arts, he studied at the Pt Sunderlal Memorial Postgraduation College in Kannauj and the Chhatrapati Shahuji Maharaj University in Uttar Pradesh's Kanpur. His father, Om Prakash Pathak, died in a road accident along with another relative in February this year. Also a businessman, Subrat Pathak has declared assets amounting to nearly Rs 5 crore in his election affidavit.