"This won't have taken place had your conscience been alive," said hymn singer from stage, minutes after Kamal Nath had left after being honoured

Congress leader Kamal Nath was a guest at the event at MB Khalsa College, Indore.

Congress leader Kamal Nath being honoured at a Guru Nanak Jayanti event in Indore, Madhya Pradesh, angered the main hymn singer, Manpreet Singh Kanpuri, who slammed the organisers from the stage over inviting the former chief minister who is accused of a role in the 1984 anti-Sikh riots in Delhi.

“This won't have taken place had your conscience been alive,” Mr Kanpuri says in Punjabi, in a video from the November 8 event at MB Khalsa College, minutes after Kamal Nath had left.

An organiser seeks to clarify: “We haven't given him a kesari siropa (saffron robe of honour). Only a memento was given. That's the tradition here.”

The raagi retorts: “You are speaking now. Where were you earlier? You should introspect. Look what you've done. I am going to complete my task now, and will never come to Indore again... If I am wrong, God will punish me. If you are wrong, Guru Nanak is watching.”

The organiser then requests him to move on with a jaikara, the Sikh religious call of “Bole So Nihal, Sat Sri Akal”.

“I will not do that,” Mr Kanpuri responds, “You need to first understand the meaning of the jaikara (call). I will only sing Guru Nanak's kirtan.”

Earlier, Kamal Nath said in his brief address from the dais: "Guru Nanak gave us social values that form a bedrock for the country. We need to protect those values." 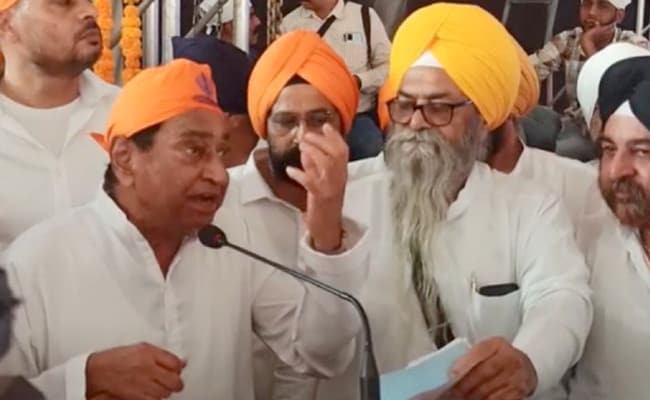 He had arrived around 1 pm, just ahead of the hymn singer's group was to sing the kirtan, from 1.15 to 2.45 pm. Arriving after him, the raagi group led by Manpreet Singh Kanpuri refused to enter the hall upon finding out that he was inside.

Mr Kanpuri relented upon requests but was angered when Kamal Nath was felicitated in a ceremony that went on for 45 minutes.

When the raagi took the stage, Kamal Nath had left, but he made his displeasure known before singing hymns for about 45 minutes.

Later, neither Kamal Nath, who denies any role in the riots, nor his party reacted to the controversy, but the ruling BJP launched an attack.

He equated Kamal Nath's presence at the Gurpurab event with Hindu mythological references of “asuri shakti” (demonic powers) disrupting religious events. “What else can one expect from those responsible for the 1984 genocide,” he said.

He also urged the famous hymn singer, Manpreet Singh Kanpuri, to reconsider his decision never to visit Indore again. “As minister in-charge for Indore, I urge him not to punish everyone for some people's bad deeds. Indore is not at fault. Some people were there to cover up their sins. They are at fault.”

Kamal Nath has been probed but not been prosecuted — owing to benefit of doubt — over allegations related to the riots after PM Indira Gandhi's assassination in 1984. A young MP from Chhindwara in Madhya Pradesh at the time, Kamal Nath was accused of being present during an attack on Delhi's Gurdwara Rakab Ganj Sahib.