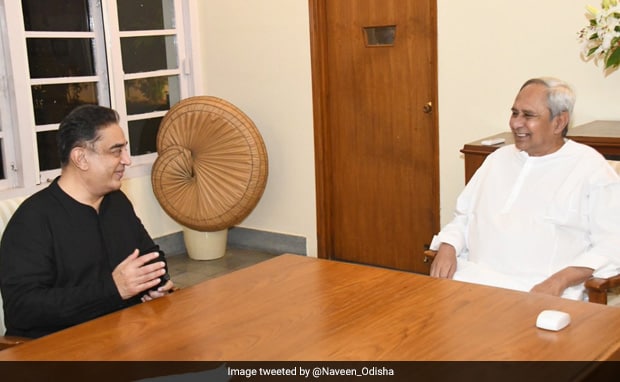 "We are watching him and learning from his wisdom": Kamal Haasan said on meeting Naveen Patnaik

"Basically, it was one-side receiving advice as a politician. I was asking my questions and I got some great answers. We are watching him and learning from his wisdom," Mr Hasan said after meeting Naveen Patnaik at the latter's residence.

Such a pleasure meeting the cinema icon Sri @ikamalhaasan. Discussed cinema, art and politics and invited him for a longer visit to #Odisha to explore the treasure-trove of natural beauty, monuments and heritage. pic.twitter.com/K2RESFwKSr

Notably, Mr Patnaik has been in power in Odisha since 2000.

Kamal Haasan was in Bhubaneswar to attend a programme organised by a private institution.

The Chief Minister said they discussed the political career of the actor-turned politician.

"We had a discussion this evening about his future political career and also about the films he is doing," said Mr Patnaik.

"If You Tell The Poor...": Abhijit Banerjee On Cash Transfers Amid Covid