BJP chief Amit Shah said that Mr Joshi was a humble leader who played an important role in the organisation's expansion in Madhya Pradesh. 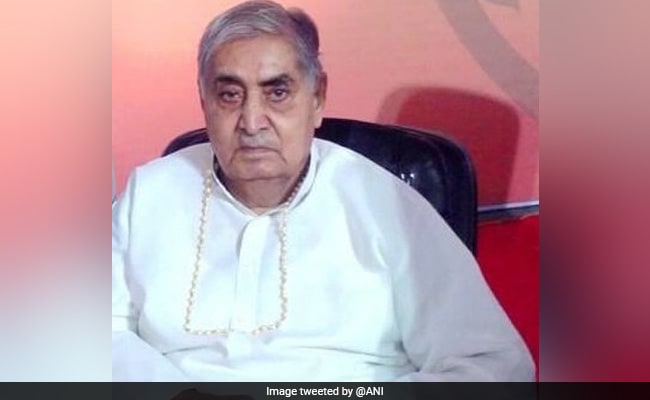 Prime Minister Narendra Modi, Madhya Pradesh Chief Minister Kamal Nath and Home Minister Amit Shah were among the top leaders who paid tribute to BJP veteran Kailash Joshi, who passed away on Sunday at the age of 90.

"Kailash Joshi Ji was a stalwart who made a strong contribution towards Madhya Pradesh's growth. He worked hard to strengthen Jan Sangh and BJP in Central India. He made a mark as an effective legislator," PM Modi tweeted. "Pained by his demise. Condolences to his family and supporters," the Prime Minister added.

BJP chief Amit Shah said that Mr Joshi was a humble leader who played an important role in the organisation's expansion in Madhya Pradesh.

"Received the news of the demise of Madhya Pradesh's former chief minister Kailash Joshi. He was a grassroot leader. He played an important role in organisation's expansion in Madhya Pradesh. I offer my condolences to the family members," Mr Shah tweeted.

"I am deeply pained at the demise of senior BJP leader and former chief minister of Madhya Pradesh Kailash Joshi. He played an important role in strengthening the organisation in Madhya Pradesh. I express my sympathy towards the family members," Mr Singh tweeted.

Former state chief minister Shivraj Singh Chouhan, who reached the hospital soon after getting information about Mr Joshi's death, said that an "era has come to an end".

"An era has come to an end with the passing away of Kailash Joshi. He gave a new direction to politics in MP - voice of the poor and weak. He was humble and soft- spoken," Mr Chouhan said in his tweet.

"Got the news of passing away of state's former chief minister Kailash Joshi. The demise of soft-spoken Kailash Joshi, who was known for his simplicity, is an irreparable loss to Madhya Pradesh politics," Kamal Nath tweeted.

Mr Joshi is survived by three sons and three daughters.

Popularly known as the ''saint of politics'', Mr Joshi served as Member of Legislative Assembly for eight terms and Member Of Lok Sabha at two occasions.

He represented the Bhopal Lok Sabha constituency from 2004 to 2014. The Madhya Pradesh government late Sunday evening declared state mourning till November 26 as a mark of respect.