After obliging her, Dr K Sivan is seen walking down the aisle and is greeted with loud claps from the passengers. Dr Sivan then smiles at the crowd and waves at them, as thanks for the warm welcome. 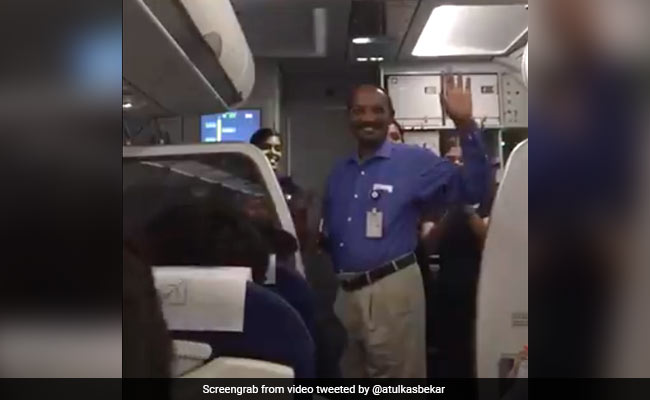 Space agency ISRO chairman K Sivan was given a warm welcome by the crew and passengers of an IndiGo flight he boarded recently. In a video being widely shared on social media, Dr Sivan is seen posing for group selfies with several flight attendants, one of whom asks the flight's passengers through a PA system, to welcome the space agency chief.

After obliging her, Dr K Sivan is seen walking down the aisle and is greeted with loud claps from the passengers. Dr Sivan then smiles at the crowd and waves at them, as thanks for the warm welcome.

The ISRO chief, known for his calm and collected demeanor, received an outporing of support from across the country after the Chandrayaan 2 mission's lander Vikram failed to make a soft landing on the moon.

At the time when it was announced that the Vikram lander had failed to make a soft landing, Dr Sivan, who had worked on the mission for several years, broke down and was consoled by Prime Minister Narendra Modi, who was there at the ISRO headquarters to witness the completion of the moon mission.

This video doing the rounds of @isro chief K. Sivan being requested for selfies by @IndiGo6E flt attendants made me very happy

When those that quietly go about doing their work, become heroes...

Videos showed PM Modi shaking hands with Dr Sivan as he left the building that housed the space agency's control room. The Prime Minister shared a few words with Dr Sivan, who then broke down.

PM Modi then leant forward, patted him on the back and pulled him into an embrace.

In a 30-minute address to ISRO scientists, PM Modi said "resilience and tenacity are central to India's ethos".

"As important as the final result is the journey and the effort. I can proudly say that the effort was worth it and so was the journey. Our team worked hard, travelled far and those teachings will always remain with us. The learnings from today will make us stronger and better," PM Modi said.