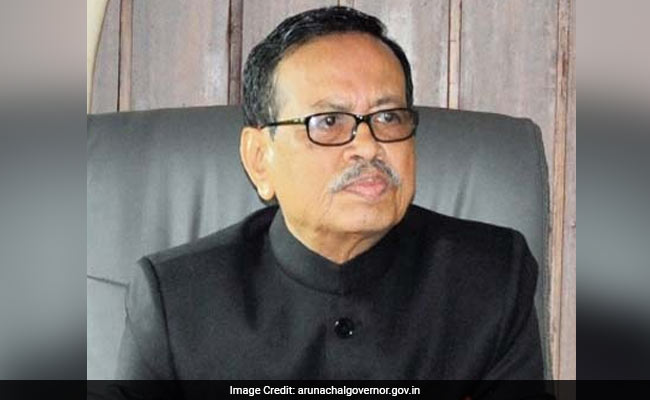 New Delhi: Arunachal Pradesh Governor Jyoti Prasad Rajkhowa has been sacked weeks after the Supreme Court restored the Congress government in the state, accusing him of violating the constitution.

Mr Rajkhowa will "cease to hold the office," a statement from the President's House said on Monday evening.

The sacking was imminent after Home Minister Rajnath Singh conveyed during a meeting with President Pranab Mukherjee last Wednesday that Mr Rajkhowa's position had become untenable and he had lost the centre's confidence.

The government waited to act against the governor until after a two-day special session of the Arunachal Pradesh assembly called on Thursday to ratify a constitutional amendment bill enabling the Goods and Services Tax or GST.

The centre had earlier asked Mr Rajkhowa to resign "on health grounds" but he had defiantly refused to step down.

The former bureaucrat was appointed as governor last year.

On July 13, the Supreme Court reinstated the Congress government in Arunachal Pradesh by cancelling all decisions of Mr Rajkhowa that had precipitated its fall in January

"The Governor must remain aloof from any disagreement, discord, disharmony, discontent or dissension, within individual political parties," a five-judge constitution bench had said.

This was seen as a searing indictment of Mr Rajkhowa, who was accused by the Congress of tacitly supporting its rebels and also helping the BJP by calling an assembly session a month ahead of schedule. The Nabam Tuki government was "dismissed" in that session held in a makeshift venue.

In February, Congress rebels led by Kalikho Pul took power with support from the BJP.

Promoted
Listen to the latest songs, only on JioSaavn.com
Some sources close to Mr Rajkhowa say he has been consulting legal experts and has plans to challenge his sacking. BJP insiders say that Mr Rajkhowa as governor had information on the centre's dealings before the Nabam Tuki government was declared to have lost the trust vote and Kalikho Pul was installed as chief minister.

The government is yet to name the successors of Governors of Tamil Nadu and Madhya Pradesh.