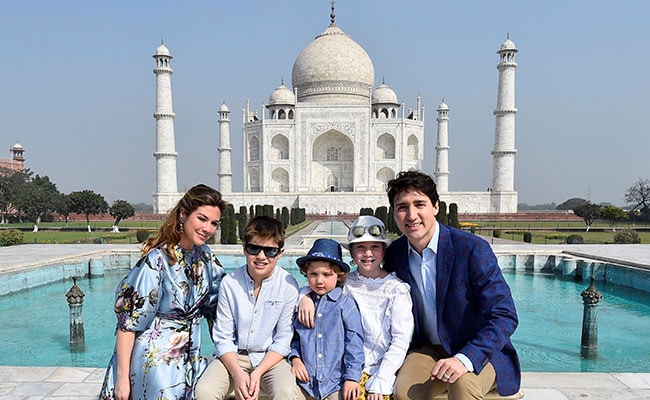 Agra: Canadian Prime Minister Justin Trudeau, who arrived in India last evening on a week-long visit, is traveling to Agra today to visit the Taj Mahal. Prime Minister Trudeau, who is accompanied by his wife and three children, left for Agra from Delhi at 9:00 am. He will be visiting the Taj Mahal at around 10:45 am, following which the Canadian prime minister will return to Delhi by 3:30 pm. Justin Trudeau, who is in India till February 25, will meet Prime Minister Narendra Modi on February 23. The objective of Prime Minister Trudeau's visit to India is to expand overall ties between the two countries with a focus on defence and security, counter-terror cooperation, trade and investment, and tackling climate change. Both countries are also expected to deliberate on enhancing cooperation in the civil nuclear sector. A number of Justin Trudeau's cabinet colleagues including Foreign Minister Chrystia Freeland, Science and Economic Development Minister Navdeep Bains, Defence Minister Harjit Singh Sajjan, Science and Sports Minister Kirsty Duncan and Infrastructure Minister Amarjeet Sohi are also visiting India. The ties between India and Canada have been rising steadily. Approximately 1.4 million Canadians are of Indian origin and India is Canada's second largest source of immigrants.

Here are the Highlights of Canadian PM Justin Trudeau's visit to the Taj Mahal today:

Photos: Justin Trudeau Kicks Off India Tour With Family Visit To The Taj Mahal, Photo Gallery
NDTV.com Photo Gallery - Exclusive Photos collection brings you the latest news photos, news pictures of your favourite celebrities, the hottest Models photos, Movie Stars images, Film Stars photos, top Cricketers photos, pictures and the first pictures from breaking news." >
Feb 18, 2018 14:44 (IST)
On February 20, he will visit Mumbai where he will hold meetings with top business leaders and meet representatives of Indian Film industry to explore various opportunities in the field of cinema. On February 21, the Canadian PM will travel to Amritsar where he will visit the Golden Temple. He will return to Delhi the same day. The Canadian PM is scheduled to visit Jama Masjid and a cricket ground in the national capital on February 22 besides delivering a lecture at a gathering of Canadian and Indian business leaders. He will then hold wide-ranging talks with Prime Minister Modi on February 23. The next day, he is scheduled to address a conference of young change-makers before wrapping up his visit.
Feb 18, 2018 14:40 (IST)
Besides his engagements in Delhi, Prime Minister Trudeau will visit Agra, Ahmedabad, Mumbai and Amritsar. Officials said Jutin Trudeau's his visit to Gujarat will be the first by a Canadian prime minister.
Feb 18, 2018 14:36 (IST)
"This will be an opportunity for the prime minister to promote Canada-India cooperation on a range of issues and highlight Canada's support for a strong, united, diverse India and to further strengthen the vibrant strategic partnership," said a Canadian diplomatic source.
Feb 18, 2018 14:36 (IST)
In 2017, the two-way merchandise trade between Canada and India amounted to $8.4 billion, split equally between exports to and imports from India ($4 billion each).
Feb 18, 2018 14:35 (IST)
The negotiators of both the countries met last week to overcome the hurdles in finalising the pact, the sources said, adding Canadian investments in India were around $15 billion in the last couple of years, and a free trade pact will further encourage investors from that country.
Feb 18, 2018 14:33 (IST)
On trade, the sources said Canadian investments in India were likely to decline in absence of a mechanism to protect them and Prime Minister Trudeau and PM Modi may deliberate, during their talks on February 23, on making forward movement in firming up the Comprehensive Economic Partnership Agreement between the two countries.
Feb 18, 2018 14:32 (IST)
Ahead of Justin Trudeau's visit to India, the national security advisers of India and Canada met in Delhi. The Canadian prime minister's visit is aimed at further boosting strategic ties with a focus on defence and counter-terror cooperation. The two NSAs prepared the ground for Justin Trudeau and Prime Minister Modi to intensify defence and security cooperation. India's concerns over rising Sikh radicalism in Canada are understood to have figured in the meeting held a couple days ago, Canadian diplomatic sources indicated, according to news agency PTI.
Feb 18, 2018 13:18 (IST)

For me to be able to be here on an official trip while bringing my kids with me to share this is really special and being able to enjoy this as a dad with my kids is really nice: Canadian Prime Minister #JustinTrudeau on his Taj Mahal visit pic.twitter.com/P1k3q9sUdZ

Message by Canadian Prime Minister #JustinTrudeau in the visitor's book at Taj Mahal in Agra, pic.twitter.com/8ku5zb15FP 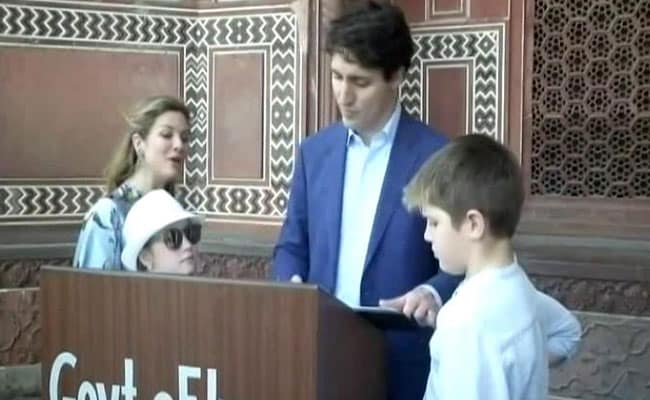 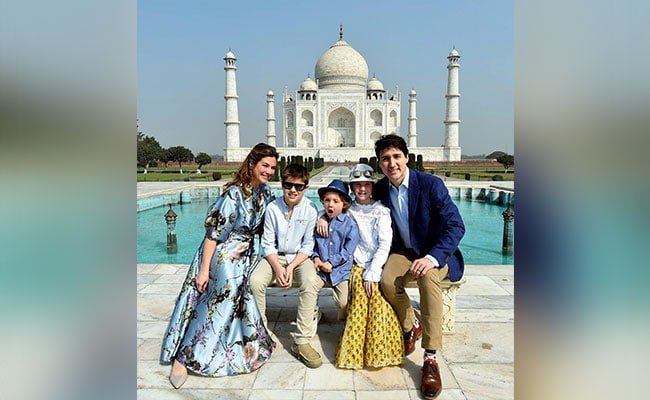 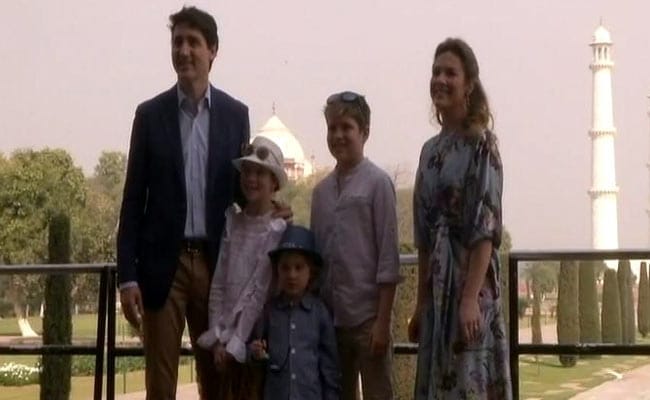 #WATCH: PM of Canada #JustinTrudeau, along with his wife Sophie Gregoire Trudeau and children Xavier, Ella-Grace & Hadrien at Taj Mahal in Agra. pic.twitter.com/DqnxoTqfni

Feb 18, 2018 12:35 (IST)
Ahead of the visit, Mr Trudeau tweeted, "Wheels up for India and a busy visit," attaching a photograph of his wife and three children boarding the aircraft.

Wheels up for India and a busy visit, focused on creating good jobs and strengthening the deep connection between the people of our two countries. 🇨🇦🇮🇳 pic.twitter.com/Jg6UmL9y4S

Feb 18, 2018 12:35 (IST)
The cultural component of the visit is seen as an outreach to estimated 1.4 million people of Indian origin settled in Canada. India is Canada's second-largest source of immigrants.
Feb 18, 2018 12:34 (IST)
Mr Trudeau's agenda is also expected to include a visit to the Golden Temple in Amritsar and Delhi's Jama Masjid and a cricket ground.
Feb 18, 2018 12:34 (IST)
In 2017, two-way merchandise trade between Canada and India amounted to $8.4 billion, split equally between exports to and imports from India. India was Canada's eighth largest destination for merchandise exports.
Feb 18, 2018 12:33 (IST)
Counter-terror cooperation is also expected to be a key focus area. India's concerns over Sikh radicalism in Canada is understood to have figured in the meeting between the National Security Advisers of the two nations held a few days ago.
Feb 18, 2018 12:33 (IST)
His bilateral meeting with PM Modi is scheduled for February 23, during which the two leaders are expected to focus on trade, defense, civil nuclear cooperation, space, tackling climate change energy and education.
Feb 18, 2018 12:33 (IST)
Over the rest of the week, Mr Trudeau will participate in business round-tables in Mumbai to promote trade, investment and job creation. He will also meet representatives of Indian Film industry to explore opportunities in the field of cinema.
Feb 18, 2018 12:32 (IST)
Tomorrow, Mr Trudeau, who is on his first state visit to India, will fly to PM Modi's home state, Gujarat. Besides a visit to Mahatma Gandhi's Sabarmati Ashram, he will also visit the Akshardham Temple in Gujarat and lead a discussion at the Indian Institute of Management on "Education and Investment Opportunities" with students.
Feb 18, 2018 12:31 (IST)
Mr Trudeau is accompanied by his wife Sophie Gregoire Trudeau and children Hadrien, Ella-Grace Margaret and Xavier James Trudeau. At the airport, the family posed for cameras with folded hands in the signature Indian greeting of Namaste.

Strategic partnership underpinned by shared values of democracy and pluralism! Namaste to the Right Honorable @JustinTrudeau, Prime Minister of Canada as he arrives on the State visit to India from 17-24 February, 2018. pic.twitter.com/hcPSLDm0kx

A high point for the High Commissioner to receive the Prime Minister of Canada on Indian soil. Aparna and I were delighted to welcome Prime Minister @JustinTrudeau at AFS Palam pic.twitter.com/f7ONqRZL0d

Feb 18, 2018 12:30 (IST)
The 46-year-old Canadian prime minister, who once remarked that he had more Sikhs in his cabinet than PM Narendra Modi, is accompanied by a chunk of his cabinet ministers. This trip, he said, was focused on creating jobs and strengthening the "deep connection" between the people of the two nations.
Feb 18, 2018 12:29 (IST)
Canadian Prime Minister Justin Trudeau and his family have reached Agra for a visit to the iconic Taj Mahal. The Trudeaus landed in Delhi last evening on a week-long visit to India that's expected to deepen ties as much with New Delhi as with Indians in Canada.