"Just Because Experience Is Not Mine...": Swara Bhasker On "Intolerance"

Swara Bhasker said, "I think it's time that mainstream Bollywood and other language industries begin to be a little sensitive and responsible in how they represent issues" 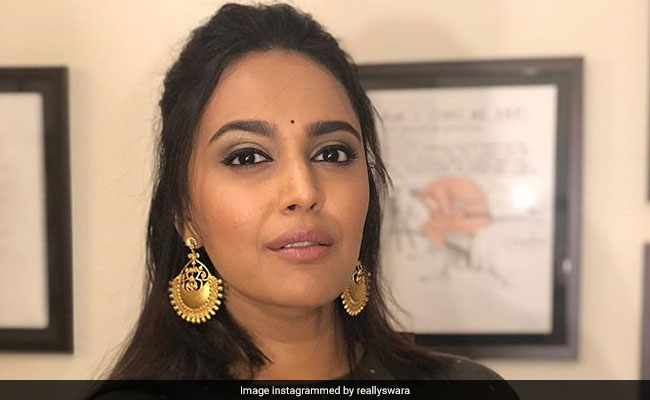 Actor Swara Bhasker said it's time mainstream film industries start being responsible in how they represent social issues, including those faced by minorities. She said if a particular community feels that something bad is happening to them, the "privileged ones" must not dismiss it.

"I think it's time that mainstream Bollywood and other language industries begin to be a little sensitive and responsible in how they represent issues. Issues that may be aren't personal to us. Just because an experience is not my own doesn't mean it's not legitimate. It's so basic, something so easy to forget," Swara Bhasker said at the India Film Project where the poster of her upcoming film, "Sheer Qorma", a love story of two Muslim women, was launched.

"At so many levels, we all must be privileged in our own ways that just because we haven't had an experience we feel 'no man this doesn't happen' or 'no, this much doesn't happen'. If a girl is saying she freezes when a bike passes next to her on an empty street, listen to her. You may not have felt it because you're not a girl," Swara Bhasker said.

"If a minority community is saying that there's intolerance in the society, then listen to it, you may not have felt it because you're not from minority community. If a Dalit is saying, 'I feel scared that I will be lynched,' listen to him. Just because it hasn't happened to you doesn't mean it hasn't happened to someone else. Similarly if queer people say, 'we feel discriminated against and we don't belong,' listen to it," Swara Bhasker said.

She said public figures "are more vulnerable to a lot of destructive negativity" and if people want celebrities to speak up, a healthy environment must be created first. "If we want our public figures, people with legacies, to speak out and take responsible sides, then we have to become the society which doesn't punish people doing that," she said.

Swara Bhasker said she lost out on four brands endorsements and three events the day she campaigned for candidates for the Lok Sabha elections.

"I am not saying, 'oh I am so great', but if you're going to make the stakes so high, that a superstar can talk about a dinner conversation and then face so much flak or another superstar can give his opinion and his car can be stoned on a shoot, then how can we expect people with legacies or public profiles to actually risk their lives, families, careers?" the actor said.

"Why should they? We need to ask ourselves questions as a society. Even with 'Sheer Qorma', I am 100 per cent sure it is going to create a debate. I am being polite when I say 'debate'," Swara Bhasker said.