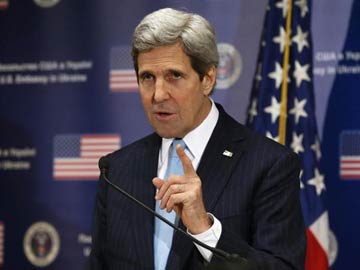 Washington: Laying out a roadmap of long-term strategic partnership between the largest and oldest democratic countries, US Secretary of State John Kerry will deliver a major foreign policy speech here on India.

Kerry, will underscore the shared prosperity, democratic values, and security that a strong US-India partnership brings to Asia and to the global order, the State Department said.

Kerry's speech tomorrow comes on the eve of his departure to India to attend the India-US Strategic Dialogue, which he would co-chair with the External Affairs Minister Sushma Swaraj.

The first Strategic Dialogue between the two countries under the Narendra Modi government is considered to be crucial to set the pace and scope of India-US relationship for the next five years.

Center for American Progress (CAP), a top think tank has launched "India 2020" programme, which is focused on elevating key foreign policy debates in South Asia and developing innovative ideas for further enhancing the global strategic partnership of the world's oldest and largest democracies.

Kerry in his speech will also emphasise how the US and India can work in close partnership to improve growth, investment, and opportunity across the Indo-Pacific region by spearheading regional economic connectivity, the State Department said.

In a statement, CAP said India is proving to be an emerging powerhouse regionally and globally after decades of impressive economic growth and military modernisation.

With a new government in New Delhi, it is clearly time to chart a new and ambitious course for the US-India partnership, it said.

"By launching India: 2020, the Center for American Progress will set the stage to help India and the United States work toward enhancing peace and economic prosperity across Asia and moving global governance institutions beyond their current structures into the 21st century," the major American think tank said.

Rich Verma, a Senior Fellow at CAP (and former Assistant Secretary of State under Hillary Clinton), will be leading this initiative in close coordination with Vikram Singh, CAP's national security vice president, who served in various capacities at the State Department and the Pentagon in the Obama Administration.

"We call it 2020 because it will look at India with clear eyes. As an example, so many policy makers think of India as its central government alone; however, we'll explore issues also at the state and regional level," Mr Tanden explained.

"Obviously, this is a fascinating time in Asia and India's relationship with powers in the region will be interesting. But what's also happening at the state and regional issue in terms of economic growth, trade, attitudes regarding India's role is critically important," she said.

"As we look out at the rest of the 21st century, we believe India and the United States have mutual interests around the world. And we hope that India 2020 will help shape American understanding of India's role," Mr Tanden said.

Last week, Mr Singh told lawmakers during a Congressional hearing that India and US have the potential in the next few years to really move to another level in this relationship.

"We are launching a project called India 2020 which is going to look specifically at what can we do, what we can achieve in five years because we think this is a particularly good moment to look at that," Mr Singh said.

"Prime Minister Modi ran on a campaign of what he called 'Surajya', which means, in Hindi, good governance. He said, I'm going to deliver good governance; I'm going to deliver it to all classes, castes and communities. That's the promise that he's going to be measured by. That's the promise that we should welcome and we should sort of measure him by ourselves," he said.
Comments
John KerryNarendra Modi