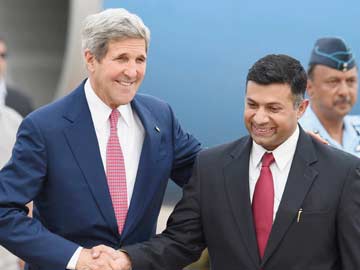 US Secretary of State John Kerry is received by Vikram Kumar Doraiswami, Joint Secretary (Americas) upon his arrival at AFS Palam in New Delhi on Wednesday.

New Delhi: US Secretary of State John Kerry arrived in New Delhi today to hold 5th Indo-US Strategic Dialogue tomorrow during which India will be raising issues of snooping by the US' NSA and terrorism even as the two sides will explore "transformative initiatives" in key areas such as defence and energy.

Noting that the Indo-US ties were at a stage of "stable and mature growth", the Spokesperson in the External Affairs Ministry said the two ministers are expected to explore new frontiers and initiatives to further promote bilateral relations.

Referring to Prime Minister Narendra Modi's September visit to the US during which he will hold talks with President Barack Obama in Washington at the invitation of the American leader, the Spokesperson said, "The opportunity (of Dialogue) will be taken to explore transformative initiatives which can move the Indo-US relations to the next level. In this context, Kerry will also meet the Prime Minister...".

He also said the focus area during Swaraj-Kerry talks would be security, energy, trade and investment, science and technology, human resource development and regional issues.

Asked if India would raise the issue of snooping by US' National Security Agency (NSA) on BJP among others, he said there was "considerable disquiet" in the country over the issue and leaders do reflect the public concerns. The issue is expected to be discussed under the cyber-security section, he indicated.

After reports emerged that BJP was among a group of foreign political parties targeted by the NSA in 2010 earlier this month, MEA had summoned a top US official and conveyed that the allegations were unacceptable and sought assurances from the US that it would not happen again.

On whether India would raise the issue of movements of JuD Chief Hafiz Saeed, designated terrorist by the US, he said any issue which impinges on India's security, of which the homeland security was an important part, and where the government thinks that the US can assist will be raised.

On the defence front, the two sides are in consultation to upgrade their ties by simplifying technology transfer policies and exploring possibilities of co-development and co-production of defence systems to invest the relationship with strategic value.

The defence trade has shown significant growth in recent years with aggregate worth of defence acquisition from the US crossing over USD 10 billion.

While major initiatives in defence field are likely to be discussed during US Defence Secretary Chuck Hagel's visit next month, tomorrow's dialogue will set the tone for the same.

The US Secretary of State's visit is first high-level interaction at the political level after the new government came to power here, the MEA Spokesperson said.

Mr Kerry's visit two months ahead of Prime Minister Narendra Modi's trip is aimed at instilling some vigour in bilateral ties, which appeared to have lost momentum in the final years of UPA regime.

While the ambitious civil nuclear cooperation agreement is stuck with American companies apprehensive of Indian liability law, the trade ties have also not shown impressive growth. Total bilateral trade in goods touched USD 63.7 billion in 2013, registering a mere growth of 1.7 per cent over the last year.

India-US ties hit a low at the end of last year after senior Indian diplomat Devyani Khobragade was arrested in New York, strip-searched and charged with visa fraud for allegedly underpaying her babysitter.

While Mr Kerry is expected to brief India on talks between Iran and six world powers- the US, France, Britain, Germany, Russia and China on Tehran's contentious nuclear programme, the situation in Gaza is also likely to be discussed.

Promoted
Listen to the latest songs, only on JioSaavn.com
The Secretary of State had recently visited Egypt where he made efforts to contain violence in Gaza but failed to broker a ceasefire between Israel and the Palestinian militant group Hamas.

The security situation in war-torn Afghanistan, which is witnessing incidents of violence in the backdrop of NATO combat troops' drawdown, is also expected to come up in the talks.