There have been no changes in the hostel fee structure for BPL students who avail scholarships and for non-BPL students, the university said. 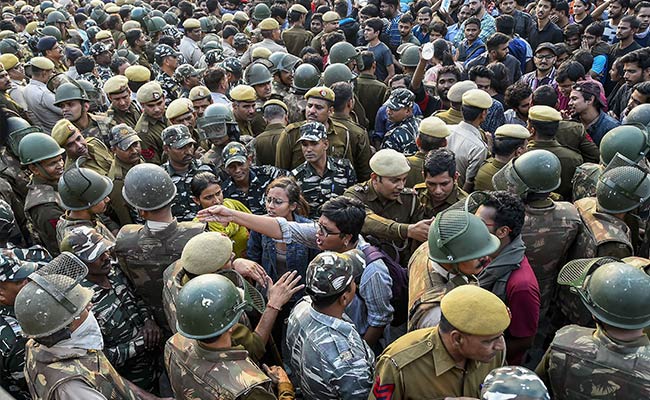 The decisions, including to partially roll back the fee hike, were taken at the EC meeting. (File)

The Jawaharlal Nehru University on Wednesday decided to partially roll back the hostel fee hike "only for students below the poverty line category" and removed the provisions for curfew timings and dress code from the hostel manual.

But there have been no changes in the hostel fee structure for BPL students who avail scholarships and for non-BPL students, the university said.

The hostel fee hike, deadline for students to return to hostels and dress code were the major sticking points against which the university students had been protesting for 16 days. On Wednesday, their protest forced the JNU administration to shift a meeting of the Executive Council (EC), the highest decision-making body of the university, to a venue outside the campus.

The decisions, including to partially roll back the fee hike, were taken at the EC meeting.

After careful consideration, the EC decided to do away with a few clauses in the Draft Hostel Manual that had drawn the ire of the students, a varsity official said.

He said the eligibility to avail BPL benefits will be determined after submission of requisite certificate by the students and the varsity will be following the norms set by the government.

The draft hostel manual, which was approved by the Inter-Hall Administration Committee on October 28, had a clause which said, "The residents should be back in their respective hostels latest by 11.00 pm or by half an hour after time for library closing, whichever is later.

"Students who are found outside their respective hostel premises after the stipulated time and involving in any violence or otherwise disturbing the peace on campus and privacy of JNU community will be evicted from hostel forthwith apart from any other disciplinary action by the University."

This, it was decided at the EC meeting, will now not be part of the manual.

"All residents and guests should come to the dining hall appropriately dressed," the new manual had said. This too was done away with.

To take care of students coming from weaker sections, the EC decided that all students belonging to the BPL category (excluding those who have Junior Research Fellowship, Senior Research Fellowship and other equivalent fellowships/scholarships either from outside organisations or JNU) are eligible to be given 50 per cent concession in the charges for rooms, utility charges and service charges, the varsity official said.

"In addition, it may be noted that all BPL category students receiving non-NET fellowship and merit-cum-means scholarships will also be eligible for this 50 per cent concession," the official said.

He added the changes will be effective from the 2020 academic session.