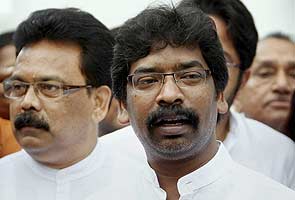 The first cabinet expansion took place 22 days after the formation of the state government.

Jharkhand can have a maximum of 12 ministers, including the chief minister. As per the understanding between the allies in the ruling coalition, the JMM and Congress will get five berths each in the cabinet; two will go to the RJD.

At present, the chief minister belongs to the JMM, and there is a minister each from the Congress and the RJD.

Reliable sources have said that the Congress has yet to finalise the names of its ministers. The Congress has finalised, so far, only one name - that of Geeta Sri Oraon, who took oath on Sunday.

Promoted
Listen to the latest songs, only on JioSaavn.com
The other ministers from the Congress quota will be inducted into the cabinet in a second phase of expansion, sources said.