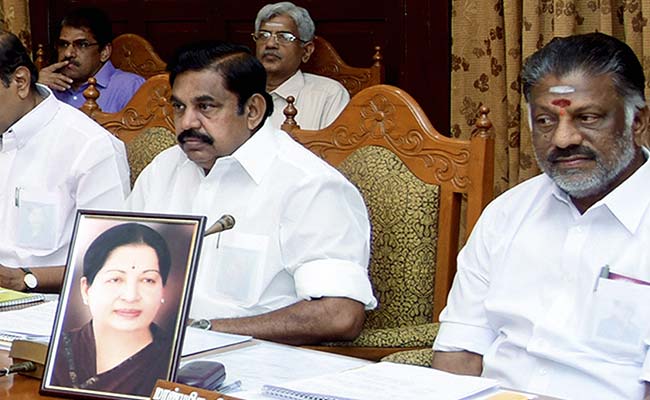 No agenda has been shared, but many of the AIADMK's 136 MLAs are at the hospital.

Lawmakers from J Jayalalithaa's party the AIADMK are holding what is being called an "informal meeting" today at Chennai's Apollo hospital, where the Tamil Nadu chief minister is in the Intensive Care Unit after a cardiac arrest on Sunday evening.

No agenda has been shared, but many of the ruling party's 136 lawmakers are at the hospital. Others are arriving.

An emergency cabinet meeting has also been held at the hospital, with most of the state's ministers, including Finance Minister O Panneerselvam, there - many of them camped overnight - as are senior bureaucrats and Ms Jayalalithaa's close aides Sasikala Natarajan and  Sheela Balakrishnan,  a former chief secretary and chief adviser to the chief minister.

Party spokesperson CR Saraswathi said Ms Jayalalithaa has had surgery this morning and quoted doctors to say "she will be fine." Senior Congress leader Thirunavukkarasu said he had met the state's chief secretary, who told him that the chief minister's condition is improving.

Mr Panneerselvam, who served as stand-in chief minister twice when Ms Jayalalithaa had to step down, has been officiating at cabinet meetings and has had charge of her ministries while the chief minister has been in hospital.

While Ms Jayalalithaa rules the AIADMK with a vice-like grip as the party's sole, powerful decision maker, the 65-year-old Mr Panneerselvam, Sasikala and Ms Balakrishnan are seen as the three power centres in the party owing to their being most trusted by the chief minister.

M Sasikala has been by Ms Jayalalithaa's side for years and is said to wield enormous power politically, including influencing the choice of ministers. Mr Paneerselvam is one of those who has benefited from being favoured by Ms Sasikala, but after having been chief minister twice, has emerged as a power centre in his own right in the party.

Promoted
Listen to the latest songs, only on JioSaavn.com
Sheela Balakrishnan, 60, a former IAS officer has a key say in the running of the government and has been ensuring along with the state's top officials that the administration runs smoothly while Ms Jayalalithaa  has been hospital.

The chief minister was hospitalised on September 22 and was treated for acute lung infection. She was on respiratory support for days before the hospital said she had improved and was speaking and was taking important decisions.