India, Japan, Brazil and Germany have also formed the G4 grouping to support each other's bids for permanent seats on the United Nations Security Council. 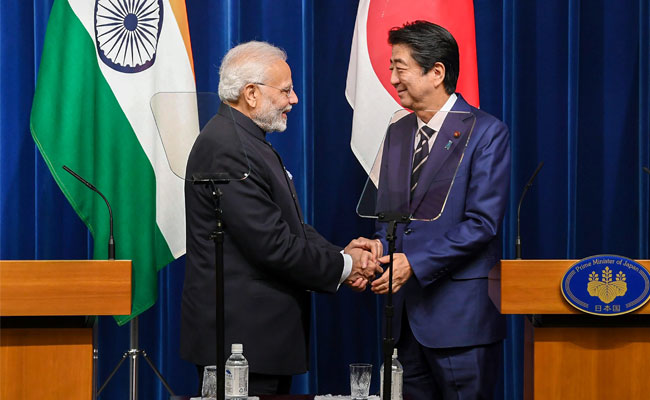 "After India's full accession to three international export control regimes, the two leaders pledged to continue working together for India's membership of the Nuclear Suppliers Group, with the aim of strengthening the global non-proliferation efforts," according to the India-Japan Vision Statement issued after the talks.

India is already a member of the Australia Group, the Wassenaar Arrangement and the Missile Technology Control Regime (MTCR).

"India and Japan seek expeditious and meaningful reforms of the United Nations, in particular the comprehensive reform of the United Nations Security Council (UNSC), to make it more legitimate, effective and representative, taking into account the contemporary realities of the 21st century," it said.

India, Japan, Brazil and Germany have formed the G4 grouping to support each other's bids for permanent seats on the United Nations Security Council.

PM Modi and Mr Abe welcomed recent developments in the Korean Peninsula, including the US-North Korea Summit at Singapore in June and three inter-Korean Summits this year as a step towards the comprehensive resolution of the outstanding issues regarding North Korea.

"They underscored the importance of realising North Korea's complete, verifiable and irreversible dismantlement of all weapons of mass destruction and ballistic missiles of all ranges in accordance with the relevant United Nations Security Council resolutions (UNSCRs)," the statement said.

"They reaffirmed their commitment to the full implementation of the relevant UNSCRs. They also urged North Korea to address the earliest resolution of the abductions issue," the statement said.